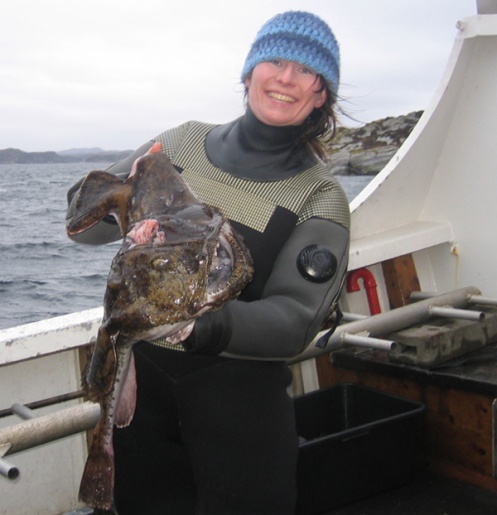 An American underwater in Bergen

I am a scuba diver.  I say that like it is some kind of an addiction.  I now believe that it is because I have been diving in Norway.  I never expected to be scuba diving this far north of the equator because I like warmth and sunny days at resorts where you pay a lot of money for people to help you into your gear and out of it again.  But I had such a strong desire to go undersea when I was in Bergen, that I joined SUB and participated in the annual jentetur (girls only) that took place on 17 November 2007.  There was little sun that day, not much warmth, and I definitely had to work a bit to complete the dives, but the day was every bit as energizing as any tropical dive in an exotic land that I have been on.  However, for me, this day took place also in an exotic land!

We started at 9:00, an hour before the boat time.  We were a group of six women, four from Norway, one from Denmark, and one from the United States.  It was a lot of work to fill the tanks, and collect and load our gear onto the trailer for transport to the boat in the city center.  No combination of my equipment would work with the SUB drysuit, so I borrowed everything from the club.  Except for my missing fin strap, which I discovered too late, we had prepared well for the day.  We arrived a little late at the boat, a skøyte, which belonged to the Octopus diving club and was called the Duen Senior.  Three members of the Octopus diving club, who were for the day, the captain, the cook, and the first mate (also one very large Viking), were waiting for us.  I am not sure what the boat did in its previous life, but it looked like it was going to be fun to be on it for an entire day at sea.  After loading our gear onto it, we set off around 11:00.

Our diving destinations were along the south side of Askøy, Hjelmo and Inderst Solviksund.  One thing I have always liked about diving from a boat while on holiday is that it provides an opportunity to see more of the landscape.  We had about an hour and a half to view Norway above the sea before we reached the first dive site.  Dive buddies were assigned on the cruise out, and mine was Nina.  Nina had been diving all around the world but claimed that diving in Norway was the best.  I was ready to see the best diving in the world because it was considerable work to prepare for it, even though no international flight time was involved.  I had been diving in a drysuit in Norway a few times before, but the drysuit, the steel tank, and the 12 kilos in my weight belt still made me feel like a complete beginning scuba diver, and Therese and Gjertrud still had to help put all of the parts on me.  With all that extra weight, finally jumping into the sea was a relief.  As soon as my dive computer registered water contact, I looked at the temperature, 8 degrees C.  There was no current, and the visibility was good.  We passed some jellyfish on the way down.  On the bottom, my inclination was to use my BC to maintain my buoyancy, but Nina would not allow this.  Her hand signals convinced me that this time I would be in control of the drysuit, so I tried it her way.

Once I was comfortable, I took a look around me.  We landed in the middle of a big sandy area surrounded by a kelp forest.  I was surprised at how white the sand was on the bottom.  It looked just like tropical beach sand though very dimly lit.  It was not long before Nina began to show me interesting Norwegian marine life.  She immediately spotted a “beautiful” fish that was nearly the color of the sandy bottom.  It was acting cool and relaxed as if it did not want to be noticed, a trick I supposed to catch unsuspecting prey or not to be prey.  The fish was hardly moving, and only a lethargic blink from its heavy sleepy looking eyelids indicated life.  We inspected it for a while, but I only realized later that it was the famously delicious fish, breiflabb (monkfish or anglerfish in English).  In fact, it was a bearded breiflabb, and his beard was perfectly spread out on the sand for us to see.  Unlike the motionless breiflabb, crabs were scrambling all around, watching us it seemed, while attempting to hide in the miniature sandstorms (haboobs for anyone who might know that word) that they created, maybe to avoid being captured by us.  Or maybe they were just entertaining each other.  A surprise guest also from above the water, a bird, joined us for at least a minute on a cold underwater hunt for food.  At 34 minutes, I could not manage any longer to regulate my drysuit properly, so we ascended.

We were safe floating on the surface, but then I realized that I still had to get back onto the boat, and with all of my gear.  As I looked up from the bottom of the ladder, I was wishing for a crane that would just lift me out of the water.  One and a half meters to the boat deck was a long way up not only because of gravity, but because I would have to do this with fins on.   Everything is just a little extra challenging in Norway, and this day was beginning to feel a bit like a reality TV survivor series of a sort.  I was sure to be voted off, because while I desperately hung onto each rung of the ladder as I ascended, Nina climbed it effortlessly behind me.  Topside, when I asked the girls how they do it, they told me that I would just get used to it.

The surface interval that followed was not just time for me to practice Norwegian.  It was also a time for me to learn something about Norwegians.  I had heard and read about underwater hunting with knives and harpoons in Norwegian waters, but I had never seen anyone do it.  My dive training is to touch nothing while underwater, but since underwater hunting is allowed in Norway, I presume because there are no large predators around, I had thought it could be fun one day to try the sport.  The jentetur proved to me that the sport is not just for men (or Norway truly is an equal opportunity land)!  Both diving groups began unloading their hunting nets.  Nina had collected many of the big beautiful Norwegian scallops as did Inger Lise and Ellinore.  There was an enormous pile of them.  Nina began immediately opening them with a knife, which made me a bit nervous, and we sampled some of them raw.  I do not know what scallops eat around Norway, but whatever it is makes them taste really good.  I noticed that the hunting net of Inger Lise and Ellinore was moving.  Inger Lise brought out a flounder, but the net was still moving!  Something else was in there.  Then she brought out her prize catch, a breiflabb!  He was still convulsing wildly, appearing to be more alive in death than in life!  I watched Inger Lise clean the breiflabb, and then I asked her, “how do you kill a breiflabb?”.  She answered with more than one option.  One method included using a tool, the knife, while another was a way to induce acute blood loss with your bare hands.  Inger Lise summed up her technique with these few words:  first, you admire it, then you play with it, and then you kill it.  I started to think this isn’t the kind of thing that I do with my girlfriends back in the States.  I could not ask to take some of the breiflabb flesh home to cook, but I took the jaws as a souvenir piece of Norway.

The boat cruised for nearly another half hour away from Bergen, and we ended up at Inderst Solviksund, a site that is a channel created by several islands that lie close together.  It was late, in Norwegian winter day time, for the second dive.  Little light was left so it was closer to being a night dive and that could bring out some different creatures.  I was exhausted after lifting myself up that ladder and thought it was impossible for me to go for the second dive, but the Scandinavian girls insisted.  Gjertrud, the leader of the jentetur, was the most enthusiastic and said, “You have to go!”  I was powerless against them, so I went.  Gjertrud also became my diving buddy.  Nina’s diving day ended with an accident while opening Norwegian scallops.  Gjertrud was another excellent guide to Norway underwater.  She very patiently guided me to rest on the bottom at around 14 meters and waited while I adjusted the air in my drysuit.  The tips that she gave me above the water on how to use the drysuit were working, and in the end, I was able to dive for 43 minutes.  She immediately began searching the kelp and rocky walls for macrolife.  I was being “lazy” and simply admiring the spectacular underwater geography of Norway, which is the same as above the water, but decorated with many different types of sea urchins and sea stars that so dramatically position their arms for display.  Gjertrud found many examples of Norwegian macrolife, including nudibranchs, flatworms, and leddsnegler (chitons in English).  It was unfortunately very difficult to appreciate the natural color of the marine life in the light that was available during this time of the year.  She also discovered some not so nice things, like potentially explosive gas cylinders, and warned me not to touch them.

When we surfaced, it was night.  The last thing left to do was to eat.  I am not sure what I was expecting to have to eat, but I did not think that the meal might be as unforgettable as the rest of the day.  When I was watching the girls clean the seafood in between dives, I had no idea that it was going to be shared with all of us.  The “cook” was able to prepare for our dinner a real fiskesuppe with a bit of fresh breiflabb, flounder, and lots of scallops.  There was nothing fancy about the way we ate the fiskesuppe, but it was the most delicious Norwegian meal I can remember having.  Maybe this was the plan for dinner all along, but for me, this fiskesuppe was probably a one-time experience both because of the ingredients and the way they had been obtained.  The idea of underwater hunting rather appeals to me now, and it is one more thing that I will have to try while I am in Norway.

As I was eating more of the soup and listening to the girls’ stories in Norwegian, I felt like I could do anything (except at that moment understand Norwegian), just like I feel after a warm water dive.  And I kept thinking, I can hardly wait to tell my male friends how to really catch a fish in Norway!  Det var en veldig koselig dag (some things are better said in another language!), and I thank Gjertrud, Therese, Ellinore, Inger Lise, and Nina for an experience that I could only have in Norway.  I would highly recommend the jentetur to any girl, but if there had been more girls on this day, I would not have been able to eat as much soup.