Sometimes you wake up from a good dream in a place that seems like you are still in the dream. Today was one of those days. I woke up in my own bungalow on an island called Gangga in North Sulawesi, Indonesia.

I am about two weeks into a so-called “swimabout”. No, I am not so clever to come up with this phrase myself. An acquaintance from a boat trip threw that term out there when I described the planned events for the next three months. It has been something I have thought about for the last seven years in Norway. Perhaps it is a way of resetting balance in the hours of sunlight in my life, so it is necessary.

My trip started with a 50.6 second time to lift off in the new Airbus A380. Amazing after several years of thinking about the “swimabout” and several months of planning, it only took 50.6 seconds to start. Of course it took another 33 hours to reach my final destination of Sorong, Indonesia, which is so far to the east that the people no longer look Indonesian, but rather are Papuans.

I traveled to Sorong to be on a liveaboard in Raja Ampat (another story) so to reach Gangga Island, I took an extremely long route. Gangga is another one of those places that doesn’t appear on most US travel itineraries, but it should. You can travel all the way here on Singapore Airlines and leave just as easily, which is important if you have ever traveled on domestic Indonesian flights. Since I had to fly from Sorong to Manado in North Sulawesi, I had two flights, one that stopped over in my favorite international airport, Makassar, which is always printed on your ticket as Ujung Pandang. Confusing. Even more confusing is that my flights were on two different airlines, which meant that I had to claim my baggage, recheck-in, and pay again for overweight baggage in Makassar. To give you an example of how much you have to just focus on the endpoint while traveling in Indonesia, in Sorong, I was allowed 20 kilos and was three kilos over at 2USD per kilo. In Makassar, I was only allowed 15 kilos but at the rate of 1.10USD per kilo. Essentially the same price. My bag made it, as did I to the international airport in Manado, and one thing I was glad to not have to do was fly Indonesian domestic flights further. They are jam packed with people and things…

I landed in Manado, with my bag, to a place so green and packed with palm trees and rain and fresh water rivers. The driver from the resort found me immediately, and we drove off. It was about a 45-minute car ride to the sea where a boat picked me up and then another 30 minutes to Gangga Island.

I could not find Gangga time on my iPhone, and if it existed, it would not be linked to GMT anyway. It is a safe place away from so-called civilization where the most you have to worry about are the falling coconuts and ants getting into your chocolate. Falling coconuts are a real hazard because the island is packed with coconut trees. In fact, one day about a meter in front of me a coconut dropped, bam, as if to awaken me suddenly from my dream.

Indonesians even on Gangga time still recognize different times of the day with different greetings in the same way that Italians do. In Italy, buon giorno is for good morning and at some point in the day before night but sometime after lunch it becomes buona sera. It is much the same in Indonesia, except that there are four greetings throughout the day. Like most languages there is good morning and good evening, but I have not quite mastered the transition between good afternoon, selamat siang, and good late afternoon, for lack of a better phrase, selamat sore. I am often missing that part of the day when the transition occurs anyway because I am, of course, usually under the water.

The second half of November seems to be a slow time for the Gangga Island Resort. So slow in fact that I have had my own personal dive guide, Paulus, for every dive, and I share a day boat with only six others who are all from German speaking countries. I have basically had a choice between speaking German or Indonesian. I took Indonesian. Two very different languages as one is grammar-rich and the other not, although word positions in Indonesian are backwards for native English speakers. It is all relative because if you would ask an Indonesian, he/she would say that English is backwards. After so many days, I can be at least polite and report my dive statistics in Indonesian.

Since the dive sites from Gangga Island all have Indonesian names, I am every day learning a couple of new, useful words in Indonesian, such as gray and banana, and east and west. You can mix these words together to get different sites around Gangga and Bankga Island, which is also nearby. So an added plus to keeping the dive log is that some Indonesian words will creep into your vocabulary, and now I can discuss the color of a banana. 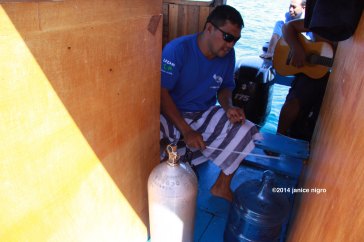 My guide Paulus is a local from an island nearby. It is a small village and his father fished (still fishes) every day to send his children all the way through university. It is somewhat humbling to meet such a person and to hear their life story-and in your own language of English. He has even built an artificial reef system with electricity running through it to stimulate hard coral growth. You can tell just by looking at the structures that he has a sense of humor. One of his additional talents is to play the guitar and sing. Not only does he play the guitar, but anything that will make a sound. So in between dives, we were treated to harmonies by the guys on the boat and they would take turns playing the guitar, accompanied by “drum beats” from the empty tanks, empty water carboys, or the boat. Wow, what a tough job interview is all I could think.

Paulus is a specialist it seems in finding really small critters everywhere. The type of creatures that you still need the dive guide when you look at your photos. I have seen Pontohi hippocampus (a type of pygmy seahorse that lives on the rocks) before but here, nearly every day I am seeing one. I am still not sure how he finds them because even when he shows it to me and I look away for a moment, I have lost it. 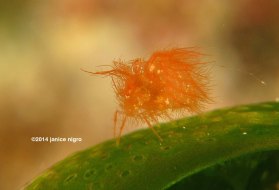 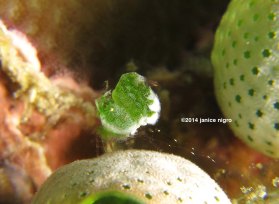 One of the most interesting parts of the dive sites around Gangga Island is the geography. The entire area has been more or less formed by lava. I don’t know how long ago it evolved as it has as there are currently no active volcanoes in the vicinity. The lava is sometimes big square blocks with beautiful soft corals growing out everywhere. On one dive, Sahaung Satu, the lava formed as a broad plateau or as the floor of a Greek temple, even with steps. You almost expect to see some fallen ancient statues. Instead, you will find a pile of baby white tip reef sharks. When I asked Paulus where the mother was, he told me, “At the supermarket. Why not?” Yes, probably, the white tip version.

One of my favorite creatures is the boxer crab. These crabs live under the coral rubble in a symbiotic relationship with two small anemones (ok there is that anemone theme/obsession again…). I have never witnessed a guide actually finding one so I can not verify where they come from but it is from somewhere under the rubble. There is a lot of rubble so you can imagine that when they signal to me that they have found something and the boxer crab is it, I am amazed. On an afternoon dive at Lakehe with no one else, I was treated to this small wonder of nature on a viewing all of my own.

The wonders of nature get even smaller. Microscopic. One day I was looking at a tiny red fur ball at Air Benua (Benua water). I could see that the fur ball somehow motored around with purpose, but it was impossible to see which end was driving the maneuvers. I took a photo and only then could I see some eyes but at the wrong end of the photo. In the afternoon at Lihaga, I saw a green blob and again only after I looked at the photo could I see the eyes, some antennae, and legs of the hairy green shrimp. You begin to better appreciate how life develops. One egg, one sperm and you become either a hairy red shrimp or a whale shark.

Just when you think you could be bored diving from a resort (not possible for me), they take you to a dive site like Efratha along Bangka Island. It is a sandy slope and a wall on one side of the island. Paulus loves to scan the sand for small creatures and easily coaxes mantis shrimp out of their holes. After an exhausting photo session over the sand, he brought me to a wall filled with cirque d’soleiling nudibranchs, a black Pontohi hippocampus that refused to look at me, and a giant black frogfish. At one point, he was pointing to a Halimeda ghost pipefish while looking for other creatures simultaneously. 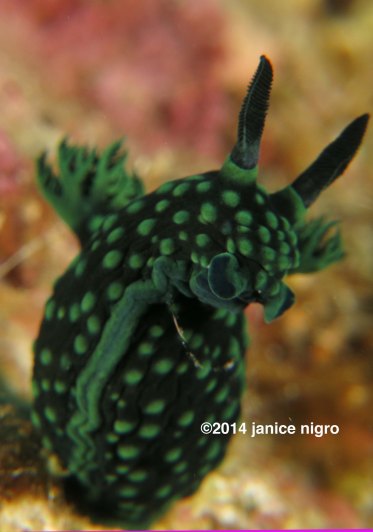 Although I have been keeping a dive log as usual while I am here, it really should be a food log. I have been eating a lot of fish, which perhaps is a conflict of interest, but here it is so fresh and well, they often serve it with coconut milk… Meals are actually four courses and since I have lost my chocolate to the ants, I am especially interested each evening in dessert. My favorite has been steamed banana with coconut milk. Sure, it almost sounds like the best thing you could get to eat if you have lost all of your teeth, but even if you have all of your teeth, you are anxiously waiting for it to reappear on the menu. Before I set off on this adventure, it seemed logical to think that I could become smaller on a small island diving three times a day. But after several days in Gangga, if there is Gangga time, I now believe in Gangga weight…

There doesn’t seem to be even enough Gangga time in the day to do everything that I “have” to do. Dive, eat, nap, and watch the sunset set. My bungalow is right by the sea, however, so you can multitask, as a big window in the bathroom allows you to take a shower and peak out at the sunset simultaneously. And when you think that you have not paid enough reverence to nature throughout the day, you still have the stars to admire after dinner and sometimes the staff will sing. One night three of us watched for shooting stars and over the course of an hour, we saw five!

So now if you meet someone and they say they are from Gangga Island, you can say, yes, I know it.