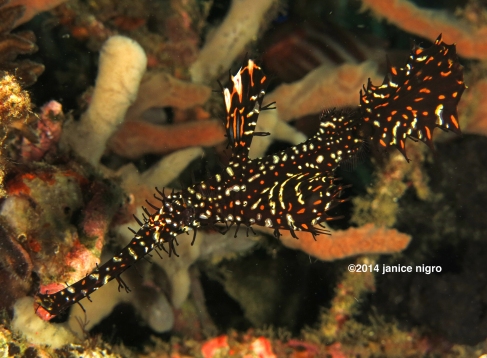 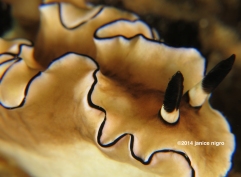 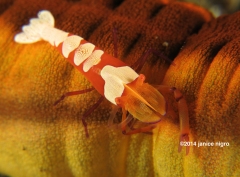 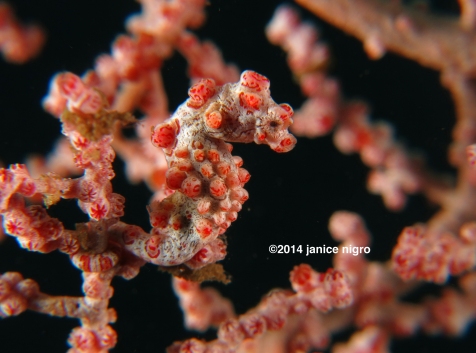 I noticed the other day that my second pair of flip-flops this year is becoming worn out.  The first pair only lasted about six weeks.  Contemplating the lifespan of your flip-flops seems like something a truly mindless person would do, unless you spent the previous seven years in a place where it rained nearly every day, confining your feet to waterproof footwear of some sort almost always.  The state of my flip-flops, then, has been perhaps an unusual reminder that I am moving ahead in my life.  Or at least in my “swimabout”.

I reach this important milestone in my life/swimabout while in a place called Kungkungan Bay at Kungkungan Bay Resort (KBR) just outside of Bitung, Indonesia, which is a city famous for processing tuna.  It appears that I am not so busy if I have time to speculate about the significance of my flip-flops, but really I am, at least in a scuba diver, traveler, photographer kind of way.  We start diving by 8:15, and dive again at 11:15, and 14:45, and if you want, you can have all the shore dives that you would like.  If you are awake for that.  Each dive is preceded by a dive briefing that is accompanied by an illustration on a white board.  The guides describe the general geography of a site, sandy slope, wall, rubble, and indicate what kind of critters we might find. When the dive guide gets to the part where he tells us how long it takes to arrive at the dive site, we laugh every time because usually it is only five to seven minutes and sometimes less.

Kungkungan Bay is on Lembeh Strait where the highlight of your day may be diving a site called Hairball.  Lembeh Strait is famous for the type of diving called muck diving.  It is what it sounds like, diving in muck, the bottom, which might include some local refuse, and yet Lembeh is on most divers’ wish list because all sorts of fabulous, unusual and even colorful creatures, with sometimes whirling parts (that may be their eyes), live there.   Many probably have yet to be discovered.  Why they do live in such a habitat is a mystery to me-it is a busy and sometimes noisy area-but for some reason they seem to love to inhabit the rubble or the garbage that floats into the sea and reproduce in it.

As a well-read diver, you can arrive at a resort in Lembeh Strait with a long list of creatures that you want to see.  There is a wish list board at KBR and some critters are 100% guaranteed, like pygmy seahorses, whereas others are not, such as a hairy frogfish or harlequin shrimp.  I do not like to make lists of critters because I feel sure then that I will not see them.  But KBR is really like a make-a-wish place for divers.  The guides will say there is no guarantee-they are always saying this-but they pretty much can find whatever you have read about except perhaps a mermaid which was an actual request written on the wish list board. 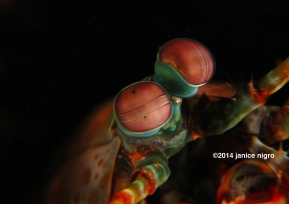 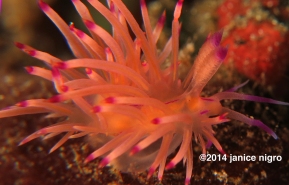 Sea creatures tend to be territorial and in the case of KBR, so do the dive guides.  My dive guide for part of the week was Ade who has been working for the resort for nearly 18 years, his colleague, Liberty, almost 19!  Together they have logged over 25,000 dives.  I am not sure who expects to see who underwater.  The critters may themselves have special names for these two, something elegant I am sure, not hairy and juvenile together.  It was always fun to dive with them because they still like to do it, and they do it with a sense of humor.  One day my camera was out of my reach and so it was handed to Ade.  “Show me the critters,” he said.  One of his colleagues told me to show him anything, just anything.  Of course, he handed the camera to me immediately, before we descended, so I had no chance to show him that I could find a pygmy seahorse before he did.

Secretly however, I did have a list…one creature that I had never seen was the blue-ringed octopus, an animal with one of the most potent venoms on earth.   I do not exactly understand what it is they eat for it to be necessary to deliver such a potent venom because they are not that big.  Of course it might be necessary because of what they are afraid of.  After many years of diving muck sites, on my first dive in Lembeh, the 8:15 dive at Pulau Abadi, a blue-ringed octopus went gliding across the bottom in front of us.   It was skillfully placing each of its legs in succession across the bottom (without disturbing the sand) and any obstacles in the way, like some kind of an extraordinary Olympic runner whose upper body never changes positions even though his legs are furiously working underneath.  The iridescent blue rings were not always on display, but just a swish of your hand in the water above it would cause it to flash them on and off.  It seems like a dangerous game to play because a bite that we might not even feel could kill us (and it is not that big).  But it was hard not to be hypnotized by such a creature because it is both beautiful and intricate.

I had a second wish…to see a Lembeh sea dragon.  This one though I did not keep a secret.  I did not say, I want to see one, or write it boldly on the board, but I said instead, how often do you see them?  One day Ade instructed us to entertain ourselves underwater at Nudi Retreat 3 because he was going to focus on finding a Lembeh sea dragon.  Sure I thought, this will be one of those dives like a blue water dive where you have high hopes and you see nothing.  He quickly showed us a hairy squat lobster and an estuarine stonefish, the kind that looks like a sunken shipwreck.  Then he led us to the wall at Nudi Retreat 3 and began to progressively scan through each section of it, oblivious to the other diver and me.  If you try this yourself, which I did, you start to discover a lot of creatures.  I found a super tiny flabellina. 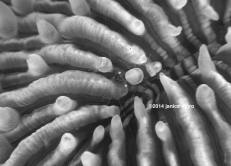 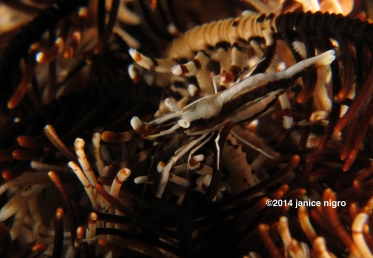 And then Ade made his underwater call from his lips, a kind of Three Stooges sounding wowowo.  I came to learn that it would be something pretty sensational when he makes that sound.  The other diver got to him first so I entertained myself with a beautiful closed anemone that was nearby.  I had no idea what it would be.  When it was my turn to look, a Lembeh sea dragon was bouncing around in the water in front of me, like a tiny rubber band attached to something at one end.  I observed it and tried to photograph it, but other divers from the other groups also wanted a chance.  It was a very short two minutes with the sea dragon.  I really wanted to stay and see how it would spend its day, where it would go, if it would travel far from that spot (I did not get the GPS coordinates…).  I still do not know how often the guides find the sea dragons, but I am glad I was with Ade on one of the days that he did.

Early December seemed to be a shoulder season of sorts for the resort (perhaps I should keep this observation a secret!), and the management bumped me up to a deluxe bungalow on the beach.  Extremely luxurious accommodations, especially for a single traveler.  The area, though, has a high density of resorts so sometimes we had to go to another dive site because there already were boats from other resorts.  Once, however, we scheduled a dive to Angel’s Window 15 minutes ahead of time to beat the other boats, but there are also plenty of incredible dive sites so you are never disappointed.  There is always a plan A, B, C, D etc. which are in essence always an “A” plan.  The only dive that did not work was the mandarin fish dive.  Plenty of some of the largest mandarin fish I have ever seen, but no mating pairs.  I still had my own dive guide for most days, and one day I was completely alone on the dive boat for three dives.  For only two days did I have to share Ade with one other guest.  He was a nice man from Singapore who seemed to have a nervous habit of constantly checking the air of the other divers, especially female ones, and to take their photo underwater.  While it is good to have such a conscientious dive buddy, one that sticks close to you, it is not ever a good hair day underwater.

The one bad part about being at a resort as opposed to a liveaboard for diving is that guests come and go at different times, so the party is not over for everyone at the same time.  It is already difficult to meet people and to see them go even when departing at the same time, but to leave when the others are going out for a dive, like to Hairball, is tough.