More on scuba diving and being an artist…

As a diver and a photographer, I think it is simple, if you are looking for something “new” to photograph, take a look underwater. So now you have the underwater camera equipment, what exactly do you do with it? There are of course a lot of technical articles with technical words (ISO, shutter speed, aperture) on how to take underwater photos or photos in general but what kind will you take? Like photography topside, you photograph what moves you to take photographs. One difference though is that it takes some physical skill to take photos of anything underwater (although being short is completely irrelevant). If you do take even the most common of underwater photographs, most people on land will have no clue what they are looking at so your photos are always “new”, even though they may be of some of the most primitive or oldest living creatures on earth.

I am not sure when I transitioned into taking aesthetically pleasing photographs underwater (or wanting to do so) from just being an underwater tourist. “Oh yeah, this is what we saw…blah blah blah. Really?” to “Your photographs light up our dark Norwegian winter days.” It probably happened once I got a strobe, and once I started to look at professional underwater photographs. The thing is although I love to try to take the kind of prize-winning photographs that others manage to do, even with the kind of basic equipment that I have, I find that most of all I like to take photographs that are just, well, pleasing to me…

It is hard to say how I started to know how I wanted to take photos or what I want to take photos of except that I simply experiment…a lot. I do not think that my photographs take much technical skill, perhaps sometimes, but often I find myself gravitating towards unusual colors, textures, and patterns because they are unlike anything you will see on land. So when everyone else is focused on the pygmy seahorse, I want to take an odd photo of a beautifully colored anemone or a sponge with unique textures (or maybe it is a consequence of being at 25 meters and potentially left behind among other issues). It started out as a game in part to test the rules of physics, and occasionally something really interesting happened. I then started to be more deliberate about my photographs and to look specifically for the kinds of textures or colors for example that I was interested in and ways to show them off, like a goby in the middle of nowhere on a bubble coral. Probably this photo is a classic but it always works for me.

I suppose it boils down to why you want to take the photographs in the first place. I am not exactly sure what land photographers feel like when they nail a photograph but because scuba diving is a sport, so is underwater photography. When you get that clear photo of a pygmy seahorse looking right at you (frankly anything in focus), it is as if you have made a shot from the three-point line in basketball. So maybe it is cool to do it. There are more altruistic reasons, like you can show the world something special, and we should take care of it. It is part of it, but probably I take underwater photos more to amaze myself than anyone else. Not everyone will appreciate finding even the smallest, oddest creatures, like a tiger shrimp, that you may never hang on your wall, near Indonesian families swimming and picnicking on a Sunday afternoon in Lembeh Strait. It is most incredible to me that these animals live so close to shore.

It is usually like some kind of an accident. I take a photo because I am curious, and it seems as if something else entirely has happened. I have seen a lot of photos of pygmy seahorses but not so many of an odd looking anemone that turns out looking like a kiss. It is one of my favorite photos ever, and it was taken in the Philippines in a place that is entirely easy to reach, but I can not imagine who else might take a photo of such a creature. Some creatures (I think they are animals), I have no idea what they really are, but I was just struck by their unique pattern or positioning. On a relaxing afternoon dive in Gangga (just me and a dive guide) I found this “thing”. I am guessing that it is a closed basket sea star, but I was attracted to the pattern of the interwoven arms. I have never seen arms this big though, nor have I seen this color. But I love this photograph. I took a couple of lazy shots and still had to catch up with my dive guide. Afterwards of course I wish I had tried harder because there is no color that I do not like this photo in. 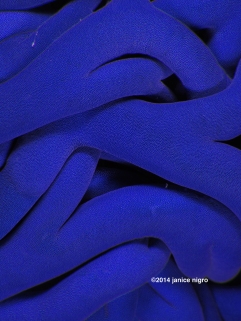 I realize that my photos will probably never win a contest. But I also realized I was onto something recently when a dive guide said very candidly, “Your photos are the kind that I would actually hang on the walls in my house.” In fact, some friends do have my photos hanging in their house. I once transformed a photograph of honeycomb coral into black and white. I did not think anyone was paying attention to it until two of my friends asked for it. It is like a photographic mystery, and it is an example of having photographs that not many other people may even recognize. One of my friends has a poster size photo of the honeycomb coral hanging in their bedroom, and honestly it could be interpreted to be a lot of things. I am always curious as to what other visitors say when they see it. What is it? Or that is beautiful?

My favorite odd things to take photos of are sponges. Sponges amaze me underwater and are most commonly shot with wide-angle lenses.  Sometimes sponges almost look ghoulish, but it is truly fascinating to me how they grow. I feel that they tend to be ignored, and we forget that they are multicellular organisms just like the critters we search for that live among them. I love to photograph sponges alone because of their different textures, colors, and yes, sometimes even their expressions. I play a bit just to see the “real” colors, and sometimes something happens that I do not expect. One of the best dive sites for sponges is the Golden Passage in Komodo. Everywhere I looked it was other worldly-sponges were everywhere growing out of the floor of the ocean.

I find humor in my photographs as well and links to iconic images on the surface. One of my photographs of a beautiful bubble anemone has an impossible to get rid of spot of sand on it. I call this photograph the Cindy Crawford mole. A lot of my anemone photos come out looking like gigantic Georgia O’Keefe paintings, which always seem ambiguous to me. Although, she often really was painting the sex organs of the flowers. The same could be said for some of the bubble anemones-while I love these photos I am not quite sure what someone might think if I were to give them one.   A beautiful open tubeworm, I like to call “Marilyn Monroe dress”. And one sponge looked to me like a giant version of “The Scream” by the Norwegian artist, Edvard Munch. A friend of mine suffering from publication rejection felt like the stargazer buried up to his eyeballs in sand. I was glad to give her a new way to express her frustration. 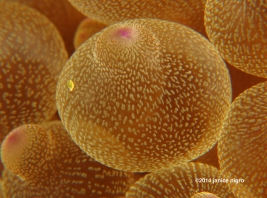 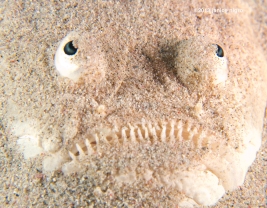 stargazer it has a body but it is buried in the sand so the face is always looking up to the stars! you have to watch where you put your fingers! my first time seeing one ever!

One of my favorite humor filled photos are my attempts to photograph mantis shrimp. They are simply too fast for me, but if I ever catch one, they always look as if they have photo-bombed the picture. In fact, what could be a better meme to put on sophisticated photos from land.

I photograph anemones a lot because I love their movement in the water. Same with tube worms although I still have not managed to take exactly the kind of photo I envision in my head in black and white. Anemones seem unlimited in textures and colors. And there are plenty of animals within to photograph. Close-ups are sort of the standard rule, but sometimes I like to “stand back” and get a perspective shot. A professional photographer once told me that a photo of an anemone and anemonefish that I had taken broke all of the rules, but he loved it.

Some photographs can be transformed when you turn them into black and white. It is obvious to see the drama in a photo of a manta ray for example but what about when you are taking a photo of an anemone or a nudibranch? It seems odd to transform your photos into black and white as part of the reason for photographing underwater is for the spectacular colors. Nevertheless, I once could not think of what to do with a common but gigantic nudibranch. So I spent time photographing the gills because they looked like a flower. The current was somewhat strong so the gills were blowing all around like in a wind machine. I made it black and white, and frankly more people look at that photo than my xeno crabs, which take infinitely more skill, physical as well as technical anyway. 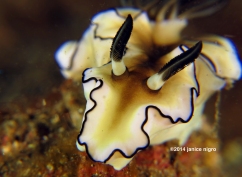 It is probably an old style of underwater photography in a time when people are looking for something new to always add to their underwater portfolio. In part, I believe that I developed this style of photography because I am using a compact camera; high end compact with wet lenses. It is possible to get quite good photographs of really small creatures, at the same time I have always spent a lot of time practicing on strange subjects underwater, like sponges, just to practice. Or maybe it is the scientist in me, to see what everyone else has seen and to think what no one else has thought (Albert Szent-Gyorgi).

I say add something old and primitive and “unseen” to your portfolio.