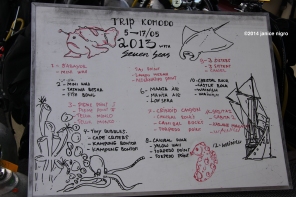 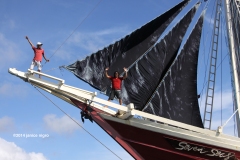 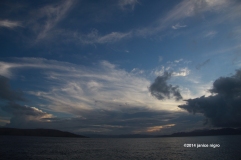 the liveaboard and speed socializing…

I have to admit, even though I ignore it, the liveaboard is a potential backdrop for huge drama. It is several days out to sea, so the first challenge is to arrive on time for the departure and with your gear. The second challenge is that you have to like what you see in the first few minutes, because once the voyage begins, you will not be getting off. I try to avoid the first problem by arriving to the departure point at least one day in advance, and the second problem, by using a dive travel agent who has been on the liveaboard he/she is selling.

I have seen drama unfold first hand-amazingingly-a fire (on a rocky open sea crossing), a firing (as in losing a job), and clandestine meetings. And one trip that I had reserved a year in advance, was cancelled not because of one boat accident, but because of two. I had to seriously consider whether or not it was a safe way to experience diving with any dive company.

The boat can be built in a traditional style, which conjures up adventurous storylines, ones that might even involve pirates. Or romantic ones like Mutiny on the Bounty-which is a bit of both-because of the beautiful dark crew members. The social aspect is the one topic that non-diving friends are most curious about; what could be considered one of the best reasons for choosing a liveaboard may also be considered to be the worse part of being on a liveaboard-that you are forced to share a limited space and to be social. Occasionally, though, the boat will not be full, and you might get to have a great cabin all to yourself.

As a single traveler, it might actually appeal to you to have so many people around because ultimately you may feel as if you really are not traveling alone. There is always something to talk about at the end of a dive day, as well as someone to talk to, and conversation including anything ending in –shark or –ray never becomes dull. It is rather like a “speed socializing” event so that in 12 days, you can meet interesting crew and guests (about 30 people) from different countries, learn about the local culture, and maybe even pick up a few words of the local language or get your feet massaged by the crew member who is also the cook. You have time to do this, and crew members are exceptionally gracious as well as usually eager to try to speak English. I learned that “matahari” (I only knew it as the name of a famous spy) in Indonesian is the word for the sun. The funny thing is that even though it seems like a lot of people in a small space, in the middle of the day after lunch, it is amazingly deserted.

I really have had only a couple of occasions out of over 600 dives to ever want to try to avoid any other guest while diving. There is enough room in the ocean to do this. Once the rest of the boat secretly thought my cabin mate was a little unstable whereas I had just thought she was really talkative. She was in fact a terrific spotter, but the comment made me a bit nervous during my last night. And on another trip a man gave me a knick-name, which he insisted on using every time I arrived for every dive or meal. I was not comfortable with this kind of attention, but for the most part, the diving diverts all of your attention, or at least uses all of your energy, so that by the end of the day nothing will bother you except that you have to keep your head up until dinner is over.

Although the purpose of the liveaboard is to dive (…eat and sleep), it is also a cruise. For this reason, I think some liveaboards are just as interesting for non-divers as well. On a boat, you might be taken out to completely open water where there are only pristine reefs and no other boats or you can be cruising around diverse smaller islands, volcanic or otherwise, which makes for spectacular viewing whether you are above or below the water. Pink and black sand beaches for sunset or maybe a game of volleyball on a palm tree covered island or even an island cave full of bats (really). I am especially partial to any liveaboard where volcanoes are on the route. The scenery is ethereal whatever your viewing perspective is, and scientific phenomena are happening both above and below the water. Furthermore, the black sand makes it easy to spot virtually any kind of nudibranch, which are usually brightly colored, even without your guide. 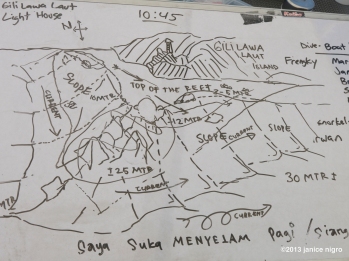 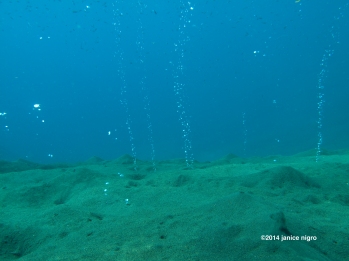 A good liveaboard will have efficient boat tenders (or at least duckies with fast engines) so that not so much time is spent going to the dive sites (and a GPS to help find the dive sites) from the main boat. It is important, otherwise there is little time in between dives (and an earlier first dive) to eat and prepare for the next dive. However, you do not have to do all of the dives. I tend to forget this…

It took a lot of courage for me to take my first liveaboard; Palau which is better by boat than from land because of the distance to the dive sites. After the first experience though, it was a bit like getting onto a diving circuit because from there I automatically planned the second one and the whole thing then has its own momentum. I had never really considered that I might feel trapped on a liveaboard with strangers, but I did think a lot about whether my skill level would be appropriate for the cruise that I chose. The diving can be at times more challenging, but the best boats really know their territory and the tides, and adjust the schedule based on the abilities/desires of the guests.

There have been a couple of times when I struggled (and I thought my heart was going to burst in my chest), but I did not panic. I either successfully completed the dive or wisely chose to abort it because I could not swim into the current. The best boats will have the kind of crew that just knows where you are/will end up so you will not be lost.

One of the unexpected pluses of the liveaboard is the quality of the food. It is hard to imagine that gourmet meals would be prepared in the middle of nowhere, but they manage and it seems like a major miracle that on top of everything else, the food takes a priority as well. There is way too much of it, first of all, and if you ever thought it might be a unique 12-day strategy for losing a few pounds quickly, forget it. Breakfasts, desserts, and some in between snacks kill that possibility even though each dive burns around 500 calories. And you must try everything so as not to insult the chef, of course. If you are lucky, the crew will sometimes even purchase a fresh fish (ok maybe this is a conflict of interest, but wahoo is my favorite), and sushi/sashimi will never taste quite that good again.

The crew in general is super-talented. In fact, without you knowing it, mini-crises may be taking place, but they manage to fix everything and can even sing and play music. I would never be hired for a job on a liveaboard.

Finally, you can even take courses on board: upgrade your skills with photography or nitrox, or even start at the beginning with open water diving!

It is an expensive adventure (make a lot of lunches yourself), but I always think more about choosing the right boat for me because I may only ever get to go once. At the same time, it is a fun exercise to consider how the crew would evaluate you: would they even allow you to come back?