A funny thing happened at Water & Wood I

Fate was at work already within minutes of my arrival at the opening. A woman standing next to me last Saturday night said, “I couldn’t be further from being an artist.” “What makes you say that?” I asked. “I am a scientist,” she answered.

I don’t often meet scientists in the beach community. Or people don’t admit to it. But I strongly disagreed with her assessment of her profession as totally removed from art. The scientist was a physicist who had worked for Boeing and the Jet Propulsion Laboratory, creating satellites and sending them off into space. I thought, it’s some part imagination and creativity to do that.

And so, one of the goals of the exhibit of Water & Wood I-to get into the conversation about art-was accomplished mere minutes into it.

I was admittedly distracted, focused on finding my own pieces, when I entered the exhibit. Of course…Even with a strong desire to see my photos propelling me through the exhibit, I still could not rush through it. The art was awesome. The pieces had been so carefully arranged. Many were paintings, large and small, on canvas, wood, and doors, but there were photographs, porcelain ceramic sculptures, and even so-called practical art-carved painted wooden hand paddles.

The layout was typical for a gallery-white walls and romantic mood spotlights on the artwork. Some movable walls supported more art, hiding some pieces from direct view, like in a maze.

My three photographs were located almost at the end. If you walked from the entrance all the way through the exhibit and on your way out, that’s where they were. I suddenly felt completely exposed. They looked like three shy photographs on the wall. Yes, somehow in that small format they radiated something about my inner self. Look at me, but don’t look at me…

Underwater life is somehow like that. Locked away beauty. It’s always there, but we don’t normally see it, so we don’t think about it.

They seemed geeky and a little scientific too. Photographs of incredibly small or weird looking creatures you can only see while breathing on a tank of air. An art that forces you to think about science and physics and evolution all at once. Add that to the fact that the photographs are small rather than gigantic, and you get Janice.

I decided it was a bold move to present your artwork publicly.

The scientist in me wanted to stand by the photos like a poster presentation at a conference. My instinct was to explain something about them. All my photographs were abstract, but nevertheless of living, breathing (although unclear how they do it) animals-a feather duster worm, a soft coral, and the mouth of an anemone. None of them resemble any kind of land-based creature.

I also composed them so they lacked any environmental context, unlike wide angle shots of whales in the deep blue. You might wonder what they are because you don’t know where they are. 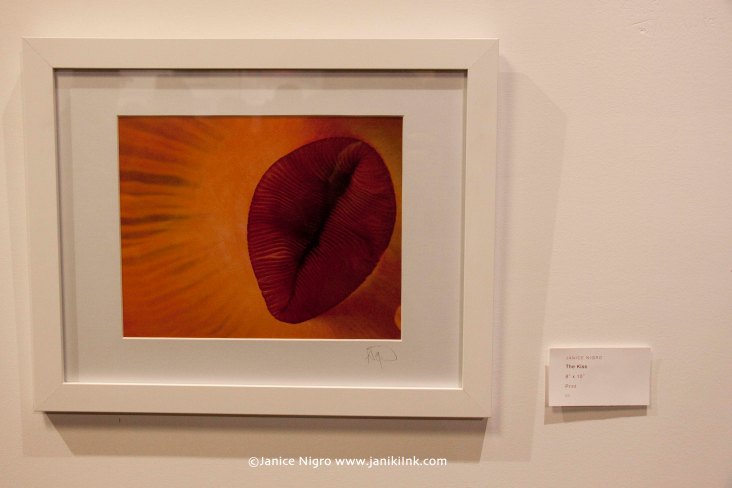 None were technically difficult to take. The Kiss (the anemone) was of one of the most humble creatures I ever photographed. It looked drab underwater losing color at depth, but the organization of the tentacles to the periphery exposing the mouth intrigued me. I casually snapped a couple pictures and only discovered upon surfacing how unique the images were.

The composition worked. “Me encanta,” one woman said. Well, almost. It sounds better in Spanish.

There is undoubtedly a subtle message that goes with any underwater photograph (good or bad)-look at what’s here it says! The view of the expanse of the blue ocean can look so ordinary, or desolate like a desert, until you put your head just beneath the surface.

And in photography, at least out in the wilderness, every shot has a story behind it.

After looking at all of the work, I started to think about the role art can have in shaping our lives. Art is more than a venue for self-expression or to create something beautiful to look at. Color outside of the lines we say, so through art, we teach children (or anyone) to not follow the rules. Make your own, and maybe this is how a young girl dreams of becoming a physicist.

Before leaving, everyone was invited to vote for best in show. I unabashedly grabbed four cards for my small group of friends and coerced them into filling them out.

My brother, who knows my photographs well, gave me the thumbs up for my choices for the show. He also gave me a big thumbs down for the highly conservative prices I put on them. He was right. If you add up the real numbers, they literally cost thousands of dollars to produce. Many hours underwater and hard earned but costly trips and camera equipment to become at least technically skilled.

If you ask me, though, I would say they are priceless…

2 thoughts on “A funny thing happened at Water & Wood I”