There is still debate about where (and how) life began, on land or in the sea? Wherever it started, it feels as if the process is still taking place underwater. Evolution seems to be actively at work in the sea, making seemingly bad experiments into ones that produce results. You have to wonder why it did what it did though because animals just don’t seem to look like animals here. Or do they?

“What is an animal?” I have to ask myself on dives. When there are no eyes to orient ourselves to, that’s when you need to go back to the definition. In its most basic form, an animal is a multicellular organism that must ingest other organisms (it may be plants or even single celled organisms) in order to survive, and it is free moving at least at some point in its life cycle.

When you look at a coral reef, you have to constantly refer back to this definition otherwise you won’t see anything. 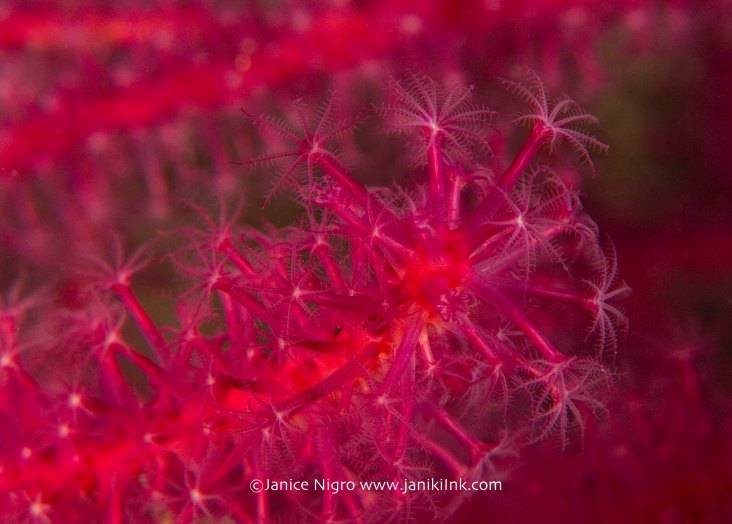 Some of the creatures without eyes, we are familiar with: sea stars, sea urchins, and jellyfish. In the healthy reefs, probably everywhere you look, you are looking at an animal. It’s the coral. And in Raja Ampat the coral really is the king.

Stony or soft, corals confound you during the daytime. Hard corals only show us their exoskeletons (although the patterns in their colonies are fascinating), and soft corals might be closed. A night dive exposes their animal status. The polyps are out; they feed and they respond to light.

I take a lot of photographs of creatures that not many others even bother to look at. But when I discovered this single beautiful tunicate, I saw a delicately glass blown vase. Yes, it’s an animal. Tunicates seem even more primitive than corals. Although they do exist in colonies, this single one emphasizes the sessile nature of the adult. Like a butterfly, they undergo a metamorphosis, in this case from a tadpole, and it begins rapidly once attachment has taken place.

Hydroids can be mistaken for innocuous plants, but they are also animals. They sting so you won’t forget! Hydroids fool us because they are sessile creatures (interestingly in response to cues from bacteria) when we see them, but they have had a whole different life before that as free swimming larvae.They have only ever been of interest to me (1) when I accidentally touch one and (2) because you often find nudibranchs on or near them. Some nudibranchs eat hydroids and manage to hijack the stinging cells known as nematocysts. Somehow the nematocysts pass through the digestive system of the nudibranch intact and accumulate in small sacs in their cerata. It seems like a bad accident waiting to happen in the poor nudibranch, but it is somehow a problem only for other creatures that might want to mess with them. 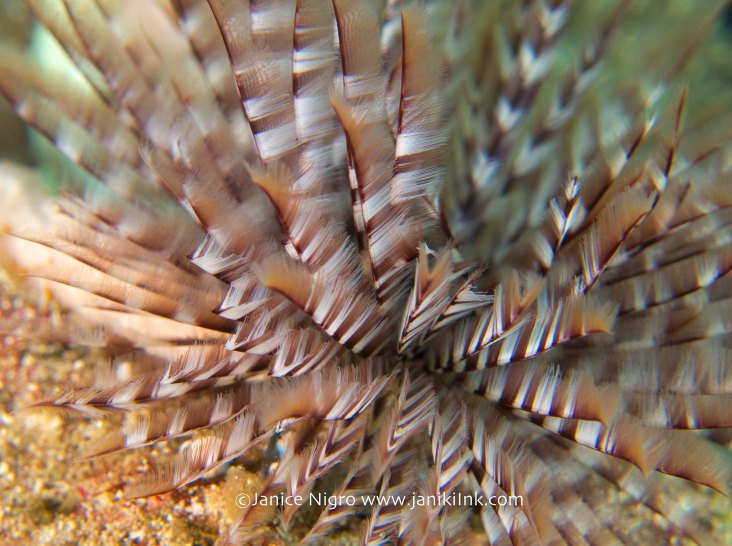 Feather duster worms are housed in a tube that they might construct from mud or sand in the sea floor. They are equipped with an elaborate system of tentacles that emerge from the tube for feeding and breathing. They hypnotically sway in the current until they sense danger. Then they instantly disappear.

I wondered once how it could be that one of my favorite eyeless animals to look at underwater, the sponge, could be immortalized in a cartoon. I couldn’t imagine who could have that kind of a sense of humor-it’s such a specific creature. But it turns out that Sponge Bob’s creator is a marine biologist. I am fascinated as to why he chose a sponge out of all of the creatures (that we know of) in the sea, but I can’t disagree. Sponges come in beautiful colors and textures developing into unusual looking structures, like they are Gaudí of the sea…

Basket sea stars really provoke me to ask, “Where evolution were you going with this idea?” Maybe evolution is not finished with this creature yet. Basket sea stars are like a spring loaded surprise. They remain coiled up in a ball in the daytime. At night they unravel into these expansive beautiful branching creatures reaching out as far as possible almost as if in homage to the moonlight.

number 13 Abstract pattern from a sea cucumber taken in Indonesia.

Sea cucumbers have a beginning and an end, but I have to wonder, which end is it? A lot of macro critters cling to them as a sort of passenger, but it is their flesh that has amazing bumps and patterns to photograph.

Anemones as everyone knows top my list of underwater subjects to photograph. It is one of those creatures where you have to marvel at what one sperm and one egg can become. It is hard to imagine an anemone as a single free swimming larva before it becomes what appears to be a gigantic flower under the sea. They are relatives to coral (under Cnidaria) and have a symbiotic relationship with algae. The algae produce beneficial small molecules and give the tentacles of the anemone color. Here there are unexpected color combinations, textures, and movement to photograph. And while they don’t have eyes, photographs of their mouths remind me of a giant Georgia O’Keeffe painting of a flower…