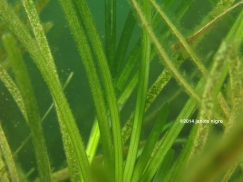 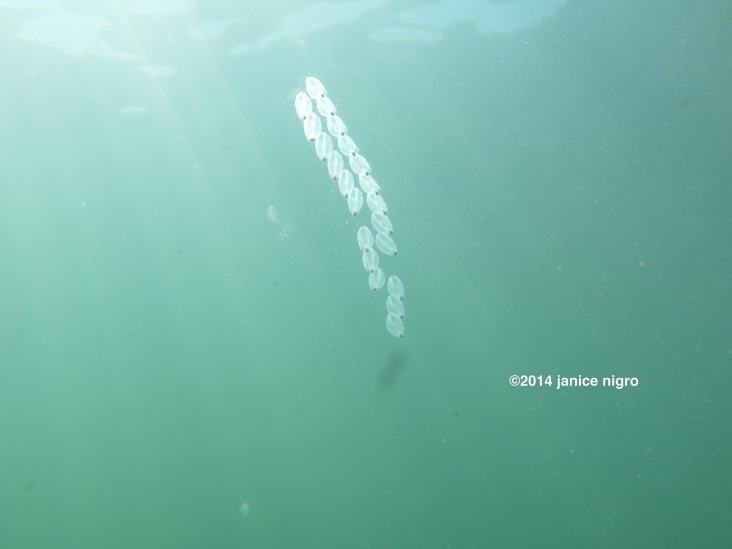 The motivation to dive tropical waters is obvious: exceptional reef-life, colorful corals, great visibility…and warm water.   The motivation to dive more temperate waters is not so obvious:  visibility is not great and the water is… cold.  In Norway, I had to try diving in temperate waters because I never really had, I wanted to learn more Norwegian and to see if I could make new friends through scuba diving, and I thought I could maybe catch a fish or harvest scallops because it was legal to do that there while scuba diving.  In Tasmania, the motivation in theory was much simpler:  weedy and leafy sea dragons, kelp, and pot-bellied sea horses.

Easy enough.  But there was still the cold water aspect (even though you feel fooled by its tropical appearance) and low visibility.  A fear of diving colder water was established by my previous experiences in Norway where I struggled with the extra weight.  Not knowing what it was like to dive with more equipment was initially a plus in Norway, but it eventually became prohibitive for me.  The dry suit was ok (except for the one time that I ended up upside down…), but I really disliked the weight that went with it and lugging my equipment out to the dive sites.  Once I had to scramble/hop over boulders, which was not so bad on the way out, but endless on the way back.  I did see the longest pipefish that I have ever seen, in Norway, as well as beautiful colorful collages of creatures on the fjord walls, but the weight was what kept me from diving more.

I put off the Tasmanian dive in the name of holidays, weather, and our camping schedule (also timed for the weather), but I had to try at least once to find a weedy sea dragon (weedy and leafy are not to be confused, and weedy is the more common in Tasmania) mostly because I did not know when I would ever get back to Tasmania.  What helped was that my friends had already put effort into this event by scouting around for a dive shop and, more importantly, a dive buddy.  The buddy, Farhan, had been diving in Tasmania but was from mainland Australia where the options are significantly warmer.  Although he thought it was worth it and had some places in mind for shore dives, he also admitted that because of the temperature he had not been diving in over a year.  We finally decided on a dive day based on the air temperature and lack of wind.  And that there were only a few days left to maintain my pride amongst my diving friends.

My dive in Tasmania was a two-day event of sorts.  One to get prepared for it because I was not traveling with a 7mm wet suit, and one to dive it.  I classified the purchase of a new wetsuit as my worst pre-“swimabout” event, but a 3mm wetsuit was nothing compared to finding a 7mm rental that fit.  I struggled to get several one-piece wetsuits on and in the end settled for a two-piece.  I got 10 kg of weights to go with that (we erred on the heavy side), and then I was ready for day two, the dive, all for the price of 20 Aussie dollars.  The first visit to the shop indicated that it would cost 30 dollars and 20 for every tank after that.  On my final trip to the shop, it was only 20 dollars, and well if the equipment doesn’t make it back within 24 hours, we will work something out.

The guys at the shop were also motivating because they were enthusiastic about diving Tasmania (as well as super patient with the wetsuit).  Of course, they said that the diving was awesome.  We cased two local sites, the north and south end of Blackman’s Bay just a short drive outside of Hobart.  The south end turned out to be more protected so it was a little calmer for entry and exit.

I got the 7mm wetsuit on even while sweating in the direct sunlight.  Step one.  My dive buddy lifted the BCD and tank onto my back, and I entered the sea with the intention of putting my fins on while floating at the shore.  I tried to put my fins on, without success, but then I could not stand up again to try to put them on in an upright position.  A good reminder not to gain 10 kg.   Again, my dive buddy rescued me-lifted me by the BCD-and mission accomplished.  I was floating, and my fins were on.

The final step.  I really wanted to take a couple of photos underwater, but as I was bobbing around a bit out of control at the surface, I wondered if this was a good idea.  A comment a friend had jokingly made “Will that rig get stuck in the kelp?” kept running through my head.  I have no idea what our non-diving helper was thinking.  Somehow I got settled, and I remembered the last time I spoke out loud, “I am not taking the camera” and the attractive dive guide challenged me, “Why not?”  So I manned up and took the camera.  Once under water, everything was ok.  I still felt like I was diving in slow motion and lumbering rather than swimming because the wetsuit was very inflexible and big.  I didn’t really feel any water until the end of the dive, so it worked.  I was totally over-weighted though and never quite got my buoyancy right on such a shallow dive.

Taking the camera sometimes gives me a distraction from my nervousness anyway.  We swam across the top for a few minutes and then descended.  Farhan assumed the role of an experienced dive guide anyway even though he had only been diving a few times in Tasmania.  On the beach, we agreed to go for as long as we could tolerate the cold.  I predicted this would be somewhere around 40 minutes.

No decompression minutes were registered on my dive computer at any moment during the dive.  And yet we found plenty of creatures to look at even though I had no idea what we were really looking for or where to look.  The first creature we saw was an enormous ray on the sandy bottom.  I was not ready with my camera, and I thought that would be my one chance to photograph a ray.  I was still working on regulating my breathing, trying to convince myself, now feeling like a gigantic, unbendable sponge, that it is just like diving in tropical water.

A little further along and not very long into the dive, Farhan pointed to a big-bellied seahorse under a ledge.  I was starting to like this dive.  They have serious bellies, and in the vocabulary that a long time friend uses for pot-bellies on humans, you could say that they have quite a “Joe”.  How they elegantly swim through the sea with that is hard to imagine until you watch it happen.  Their version of blubber perhaps to keep warm?  But the word belly in the common name detracts from their truly mythical creature appearance.

The seahorse refused to face us, and again I worried that this would be the only one that we would see.  I was wrong both times.  I can not remember the final tally on the number of rays we encountered because once I got good at looking around me instead of at my equipment, rays were really everywhere, especially buried in the sand.  I had to periodically remind myself that we were in less than 10 meters of water for the entire dive. 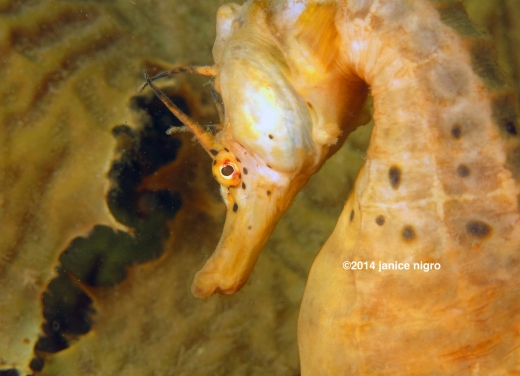 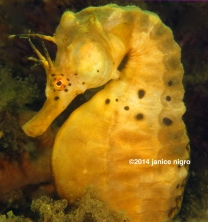 I do remember how many pot/big-bellied seahorses we found.  Three.  Two of them, I managed to photograph while facing me, but they did want to lead me on a chase.  I tried to wait for them to come to me, but my first couple of shots had to do.  I have to admit that photographing these seahorses was much more satisfying than pygmy seahorses at 25 meters because not only could I get them in focus under stress, but I could still find them easily in the photograph once I took it.

It was worth it to examine the habitat more carefully as the kelp for one (although there are many types of sea plants to examine) is where the animals are, just as in a coral reef.  The kelp is like a magnified plant and hardly seems real-almost like the ocean produced its own source of flexible plastic/rubber until it hits the sunlight.  Like a vampire, it takes on another form when taken from the water and left in direct sunlight.  The Aborigines took advantage of this transformation and created beautiful water bearing vessels.  The kelp was thick like a jungle underwater, and I wasn’t sure that anything less than a real machete was going to cut through the “rubber” if I got myself or my camera tangled in it.  We did not take a machete, but we did have a modest dive knife just in case.  I was looking intently for invertebrates, including cephalopods.  Octopus was common to eat, and we had found cuttlefish bones on the beaches.  I only found some tunicates and sponges but no anemones!

The dive was at 44 minutes, and I thought, “OK, I can make it to one hour.”   Suddenly, out of nowhere, shot a fish with an intricate pattern on its skin.  It looked like a type of cowfish; later I found out that it was, but the female of the species.  A gurnard perch looked more like a mechanical toy or a futuristic starship, suspended in mid-water raising and lowering its great back fin like a hazard light flashing on and off-dinka-dinka-dinka.  It zoomed past as if it were racing to make a traffic light and disappeared into the greeness of low visibility…  Nearly another 40 minutes went by, as I was hypnotized at what I could see in a three-meter dive.  But then the water started to seep in, and I finally started to notice that I was cold.

I was exhilarated when we surfaced, and somehow my plan to just walk to the shore when my feet could touch the bottom actually worked this time.  I could never manage this strategy in Norway and instead would end up beached on the rocks waiting for the others to strip me of the steel tank and weights.  But the weight belt somehow twisted itself around me so that I could not release it myself (kind of a good thing to know for next time).  My dive buddy took his equipment to the shore, and then he helped me remove mine.  The first thing I checked on my dive computer was the temperature.  15oC!  Then the time, which was 81 minutes.

A sticker from the dive shop validates the dive: Blackman’s Bay, Tasmania, Australia.  The dive was a spectacular success and cost a mere 20 Aussie dollars.  And I got to do it while staying in luxury accommodations for free that came with homecooked meals…  It was fun (we survived first and foremost), and both Farhan and I felt inspired to do more diving in Tasmania.  My time was up though.  I keep wondering if I will get back to Tasmania, as it is a long way from anywhere.  Almost like Raja Ampat.  But I still have not seen the sea dragon…

One thought on “Diving and dragons…”