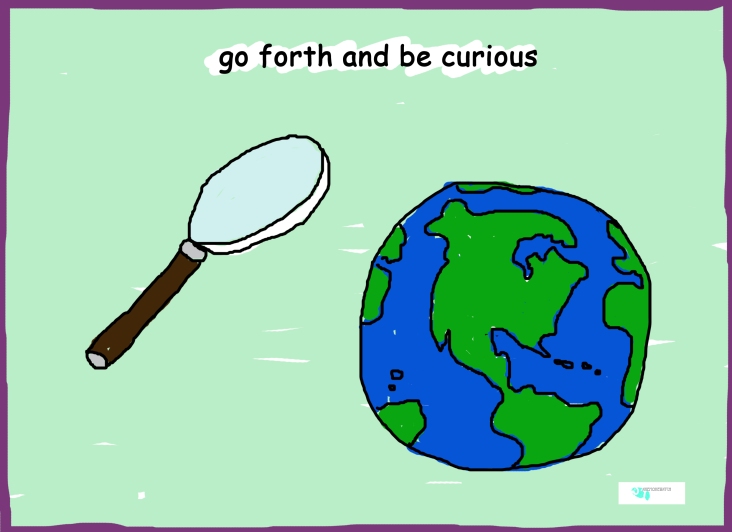 go forth and be curious
by Janice Nigro

Living a creative life we tend to think is reserved only for artists-anyone painting, writing, acting, or photographing. Not many would add scientists to a creative life list; science is problem solving or logic that has the end goal of producing previously unknown facts. We hope anyway!

Art and science do intersect and in not so subtle ways. We write, we make images, and we even perform (presentations).

But perhaps most importantly, there is art in the way we think. Like any art, we need to protect what it is that keeps our work creative. Otherwise science becomes a job. In her book Big Magic, on how to live a creative life, Elizabeth Gilbert says it’s curiosity. Passion dies, she says, but curiosity will always get you somewhere. That’s what she claims keeps her creative life living.

Curiosity made me do it. I started to think about curiosity and how it has guided my science life. I see it everywhere in everything I do. Curiosity works. I do not wonder so much about cooking, and guess what, I am a bad cook. I was curious about how it would be though to live outside of the USA. After so many years of wondering about it, I finally did it (and for seven years!).

I have had long periods of nothing happening in terms of publishing in science. In fact, ten years after a particularly bleak period in my publishing history, it came up in a grant review. Hey, she had no publications ten years ago! What the reviewers failed to notice is that I still remained curious and produced some great papers fundamental to my field after that.

I left my postdoc in Tennessee because I was curious about living in yet another place, San Francisco. I moved there because I could also satisfy my curiosity about genomic instability in human cancers. I had one publication, but that lab was a poor environment for cultivating curiosity. That experience though led me to something else that I became curious about-what underlies the development of human brain tumors.

Many exciting projects with many exciting collaborators developed from this curiosity, although I did not warm up to the main project immediately. But when I was given the opportunity, I took it. The technology for the project was cutting edge at the time. So even though I was not so interested in the question being asked, what was the worst that would happen? Learn new technology (and while living in San Francisco)? I was well…curious about it.

I started to get busy with the basic nose-to-the-ground grunt work, making RNAs. Over forty of them I made. While I was doing that, it occurred to me to add some additional control RNAs and the matching tumor DNAs. I could now see where this paper was going. The final output would be an integration of datasets, something that had not been previously done at the time. I did not know what form it would take, but I knew it would happen.

It took me four years to reach that endpoint. But it wasn’t without a team of fellow dreamers that I was able to reach it. My dream idea became our dream idea, and the final image appeared on the cover of the journal we published in.

Research overseas. My curiosity continued to flourish. I was curious both about living overseas and whether models for low grade gliomas could be made. Both curiosities were fulfilled, when I moved to Norway to find out how to implant human tumor cells in animals.

It took me a long time to settle down. I sometimes thought, maybe I am not really moving forward. I tried a number of different ideas, but for various reasons, I could not see how they would develop into a publishable project.

A waste of time. Distractions maybe. But something was cooking. Just at the point when I thought there was nothing left for me to do in that place, I wrote the grant of my life. Because I was curious, I guess, as to whether I could get the idea funded. This grant, I have to say, I wrote with passion.

I got the grant. It was a high point though that crashed immediately. For unknown reasons, the university declined my grant. I refused to take no for an answer. I did not give up, at least not yet, because my curiosity was killing me. Could it be done? Could oligodendrogliomas, a type of low grade glioma, be cultured in a model system?

I discovered after three years, that indeed, oligodendrogliomas could be grown in model systems.

I was not up to the next challenge, though, and I became curious about living in countries other than Norway. However, I remain to this day curious about the factors contributing to the growth of human oligodendrogliomas.

In my science career, my curiosity led to completing degrees, unexpected papers, and new ways of living within my own country and others. My first publication from the work I performed in Norway was perhaps the paper I am most proud of in my career, because it was based purely on my own curiosity. Not anyone else’s.

Curiosity (and hard work)-nothing more-is the basis for some of our biggest developments in the biological sciences. When you break down creative living into one part curiosity, that’s something we can all be in control of.

So what do you really wonder about? Maybe this is the question we need to ask and to focus on when we teach, when we criticize, and when we review scientific work. How curious is this scientist about reaching the answers to this question? Because in my own experience, if that is apparent, the question is just a technical issue after that. That scientist will find the answer.

2 thoughts on “go forth and be curious”