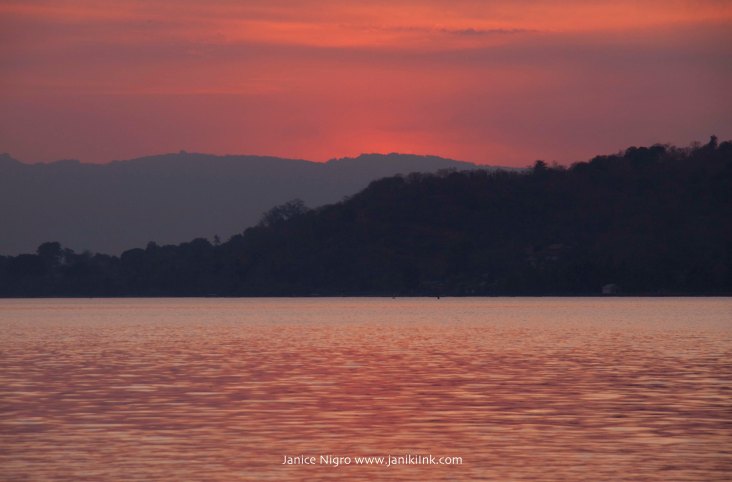 I took a last-minute trip to an island in Indonesia I had never been to in September. I don’t know how a person can do that, but I did. Cheaper fares if you fly through Hong Kong when it’s typhoon season, helped maybe. I even bought a new underwater camera rig before I left. Learned some essentials and then just went diving.

I booked through a couple I met in Indonesia several years ago running a dive travel business in Bali. They run the Indonesian branch of a European dive travel agency. I didn’t know this until I arrived in Bali this time. She is French Canadian, so you can guess-many of their clients are French speaking.

Yep, I ended up on this remote holiday with 8 other guests, all French speaking. They all speak English, but it brought me back to my time in Bergen hanging out (very lucky for me) with a large group of French. Just listening to the language and not understanding a word of it. But while eating delicious food, wine, and cheese. Yes, we too had cheese, salami, and pastis before dinner every night. Their suitcases weighed a ton on the way over.

Since I was outnumbered, they taught me a few French words, like “salut,” so that I could at least greet them politely in the morning. Although in Indonesia, I was favoring learning Indonesian words. But French is still such a beautiful language. And I had wished I could have stuck it out in a French class I was taking in Norway and learned a bit more. It would have been even more fun…

They told me though that my pronunciation was pretty good. It was probably due to a trick that the French Canadian had mentioned her husband uses. Stretch your neck tilting your chin upward to let the air flow through. I added stepping on my tippy toes to make a French sound come out. Only I didn’t realize I was doing that until someone pointed it out.

It was a problem at first to get used to French accents again. ‘ammer-eds’ was a tough one for me to get. And one Frenchman was talking about ‘airy soup’ one day. I couldn’t figure it out, and even when I realized he was talking about ‘hairy soup,’ it still didn’t make much sense. I don’t remember where he had had that experience, but the soup had something to do with chicken embryos.

The dive trip was super fabulous. I was even more remote than ever before (look it up-Alor, Indonesia). So far away from urban life. The resort had no other option but to make most everything from scratch except for the butter (a must-have for one of the owners) which comes from Paris via Bali. Satay is made with freshly ground Indonesian peanuts. They even roasted their own locally grown coffee beans. I’m not a coffee drinker but I had to try it only because it was fresh roasted there. Hibiscus tea made right from the flowers picked on the grounds and coconut water tapped straight from coconuts.

And the fish…well I am ruined forever for fish here in the markets. The fish (it was line fished yellow fin tuna purchased from a local fisherman) there comes right out of the water-and is served just like that. We have no idea what the meaning of fresh is even here in California. I’m convinced even minor preservatives affect your health in ways you can’t tell until everything you get is fresh. And that’s just how it is there.

Not only a dive resort but almost a health spa by default. An added perk.

The funny thing is the woman of the couple who owns and developed the resort is from my very own town in Southern California. It was kind of unusual to find another American at the end of a hugely long travel route. Indonesia is such a big European destination. Americans seem to make up a much smaller percentage of tourists. But there she is in the middle of nowhere, creating her own magical world with her partner from the UK. I was impressed.

My new camera worked great despite some initial problems. I decided to buy a mirrorless camera so that I could have dedicated lenses. I ended up using only the 60mm macro lens. I was having an issue with the housing the first day, and once I figured that out, I didn’t want to mess with it any more. The camera was so much easier to use. I now wonder why I waited so long to buy such a rig for underwater.

The diving was slightly challenging though so I didn’t really have much time to develop any type of artistic techniques. And time goes by so quickly. By the time you are in the groove, the diving is over.

Back to real life right now. I finally finished an article a client suggested I work on while I was on the airplane, train, or bus…Ha, ha. No chance in between the diving, language classes, eating, and sleeping.

More details and photos coming, but my head is still spinning right now with the grandeur of nature and a unique cultural experience from all perspectives.