Flying over reefs in Indonesia

It was my fifth airport in 4 days of travel. And I still hadn’t arrived at my destination.

“Is this a vacation?” I asked myself.

Living in LA, I can’t cry that I have poor access to a major airport hub. I was on my way to another diving adventure. This time in Alor, Indonesia, a small remote island a little east of Bali.

My journey had begun 4 days before. I had dragged my dive equipment laden bag to LAX just before midnight, to catch a flight just after midnight, with the help of my brother and his girlfriend. Although it was the middle of the night, the day almost seemed to begin in LAX as flights prepared for their return to Asia. Passengers were frantically purchasing whatever they could for their flight out. I’m not sure why, as the major hubs in Asia no longer look different than any other airport in the rest of the world. They all sell the same name brand items. And chocolate.

A long flight out sometime after midnight can be relaxing. I had nothing to think about for 13.5 hours after a couple of weeks of last minute organizing. And in the middle of the night, you tell yourself you will sleep on the flight. That plan is flawed. Yeah, you are in economy and you are served dinner an hour and a half after take-off once the plane has reached cruising altitude. It’s not the right time to eat, or more importantly worth waiting up for, but the next meal doesn’t come around for another 10 hours. You feel compelled to consume the organic matter put in front of you.

I think at that moment of Anthony Bourdain’s policy of never eating the food offered on airplanes. He wanted to arrive hungry, ready to eat.

That was his job though. The meal in front of me held no surprises this time either, but I did eat it.

The first leg of my travel was to Hong Kong. I have never been outside of the airport, so the true nature of the island and its people remain in my imagination. I had to wait until the sun came up (plus one day) to see Hong Kong, but I was both mesmerized and nervous to be descending over the ocean into an island (to the island) with a backdrop of green mountains.

International airports are designed so that incoming passengers arrive in a way that separates them from outgoing passengers. This means a walking tour through the airport, when you feel a level of irritability approaching a childhood tantrum. It’s just to enter another TSA checkpoint and then to discover you’ve gone full circle from your arrival gate which might now be your departure gate. Even when there is plenty of time between flights, this process is stress inducing (but necessary), as unpacked items at the checkpoint never repack the way they did at home.

All I had to do was stay awake, keep track of my carry-on baggage, and not lose my cool.

I was dying to eat, because it was the Hong Kong airport. I imagine the food available in restaurants all around the island. You have help in the airport. Delicious looking Asian dishes are flashing on giant screens. Even at 6:30 in the morning. “Go get some dumplings” creeps into your conscience (and even my text messages). These signs are much bigger than any sign with the arrival and departure flight information, and yet, they don’t tell you exactly where to find the dumplings.

My next flight was another 4.5 hours to the third international airport, Ngurah Rai on Bali. You arrive with what seems to be the entire rest of the world. Everyone wants to go to Bali more than they do to Hollywood I think.

I knew my flying wasn’t over. But I also wasn’t expecting three more domestic flights to reach our final destination.

The recent cancellation of a direct flight to Alor from Bali made it a complicated route now requiring a flight with one overnight in an airport hotel and two flights after that.

I was back at Ngurah Rai the next morning now at the domestic terminal. Only passengers are allowed to enter, and the screening starts just as you enter any airport in Indonesia. It’s a superficial x-ray and metal detector screening of you and your baggage. I had to lift my baggage full of dive equipment up onto a conveyor belt and then again remove it on the other side. That’s not the end of it; once you’ve checked in, you must pass through an official TSA check of your carry on bags.

My flight was delayed an hour. In front of me in the terminal was full-on Southeast Asian culture; people sprawled out everywhere waiting for their flights. Maybe that’s what all airports look like, but there’s a tension there that I never feel in other airports around the world. It’s the kind that develops from having to watch for women jumping the line in the restroom.

A boarding pass is like having a ticket to a special episode of People Watching. In Ngurah Rai, it’s a mix of Indonesians and people from everywhere in the world. Historically most major European countries had claimed some island in Indonesia as their own. It doesn’t seem any different today. If you know any languages, the international airport in Bali is a place where you can practice many of them.

The westerners who have become their own sort of cliché in their effort not to be a cliché where they come from are my favorite people to watch. The men hijack local beauties, get tattooed, tie up their hair in a man bun, and grow beards. I often wonder what the future holds for these relationships. If you leave Indonesia, is the magic gone? Or maybe you just don’t leave Indonesia…

Indonesians tend to line up for their flights early, which adds to the chaos of humanity before me. I never understand this behavior. Passengers are often simply reshuffled as they board a bus to meet their remotely parked plane. The modern-looking gates in this new terminal were just a fancy doorway to three flights of stairs down to the bus. And at the plane, passengers entered through the back door when they probably should have entered through the front door. Flight attendants could help direct passengers, but they don’t, and you just have to wait.

Exiting the plane at Kupang.

My flight was to Surabaya which is on Java. We flew backwards to the west to another time zone to catch our series of flights to go east of Bali. Another mess with your mind route that thankfully we can leave to our phones to deal with.

At Surabaya, I collected my bag and steered through the mass of taxi drivers clamoring to give me a ride. I must have said “no thank you” 10 times before I cleared the crowd. An airport hotel was a great idea, but building it without an elevator was not. The only access to the hotel is on a very long and steep escalator. I checked in and quickly fell asleep in my minimalist Scandinavian style hotel room with a view of the runway.

The next morning, I met my group at 5AM. They were all French speaking which was an unexpected twist to my vacation experience. The routine was the same to enter the Surabaya airport-hand over your boarding pass, load all your belongings onto the belt for screening, collect them, and proceed to check-in.

We were flying to Kupang. The names of these cities just roll off my tongue now, but this was a learn the geography of Indonesia as I flew trip. Another couple of hours and we were there. A trip across the tarmac, back through security, and then we waited for our final flight to Alor. The airports were getting progressively smaller, and I could feel my stress dissipating. Kupang is a city on the island of Timor, which is a center for mining and fish agriculture. It was the last big city we would hit for the next 11 days. 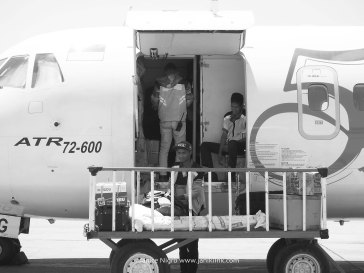 Our flight to Alor was on a twin engine turboprop plane run by Wings Air, a subsidiary of Lion Air. We packed into the small plane. Transfer of your checked baggage is pretty low tech. The system in Indonesia is still rough on my bags, but I have always found it at my destination.

The flight was only 45 minutes, and I had high expectations for what we would discover under the blue water and in the reefs we were now flying over. We landed at my sixth and final airport.

We funneled into the small baggage claim area, one of three rooms to the airport, and yes, waited for our bags to come around on the baggage carousel. It has to be the smallest model available, and you could imagine it had been installed more to impress than to do anything functional. Nevertheless, people crowded around it as if they might miss their baggage on the first pass around.

We still had an hour car ride on some OK roads and then some not so OK roads. We made it in time to watch the sunset and catch our first meal in one of the most remote places I have ever been.

The real show, the diving, was about to begin. I didn’t know what I was in for. But I somehow knew that if someone asked me the next day to do that four day flight plan all over again, I would say yes.

2 thoughts on “How far would you go?”