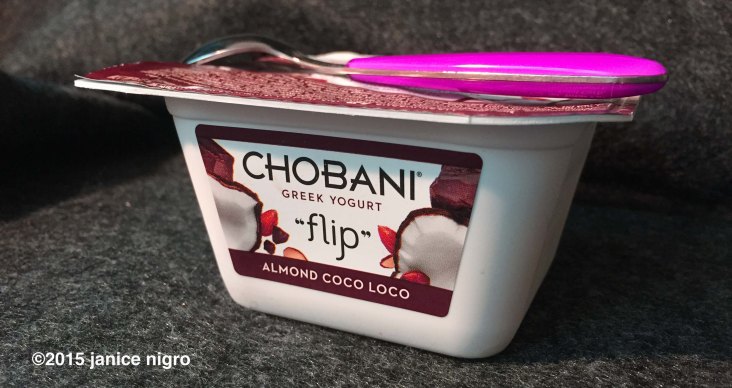 I was creeping around the grocery store looking for my food fix…if you can believe it, it was for a yogurt.

How did this happen, that I was looking both ways before stepping into the dairy aisle to casually put 10 Chobani flip Almond Coco Loco yogurt into my basket? I was just there the day before.

It may be surprising, but there is one food item that I miss from Norway. It is hard to believe as I have often commented on how traditional Norwegian cuisine is from 500 years ago and for all practical purposes it could be 500 years old based on the manner of preservation. Dried ingredients-so-called traditional food-do appear in Norwegian cuisine, which is understandable considering how harsh winter can be and how remote people lived/live. But somewhat contradictory based on their addiction to technology to the point of almost eradicating the necessity of real bills/coins.

Some of the food prepared this way is good, a little salty, but good. And some is incredibly nutritious and again delicious and satiating if prepared right, like the dried cod (bacalao), which is produced in the same way as more than a thousand years ago. I think lutefisk (fish preserved in lye) is also packed with good stuff, if you can get past the way it smells when it is cooking. The aroma is so strong that it is difficult to even eat anything else when you are surrounded by lutefisk on plates in a restaurant at Christmas. This dish is still so popular at Christmas (or no one wants that aroma in their own house) that I was about the only one eating Thai food at a Thai restaurant once. It is the kind of thing that you may cook and then decide you can’t eat.

One of the food items I actually miss from Norway (besides the incredible strawberries, raspberries, and cherries in summer, the seafood restaurant on an island in Bergen, my French friends’ cooking, and Eli’s African chicken dish) is the yogurt. Go’ Morgen. Go’ Morgen vanilla flavor with nuts to be specific. Sure there was some sugar but the nut part is something not typically found in yogurts in the USA. Nuts are a common ingredient in yogurts in all of Europe and have been forever.

But one of the real differences in Norwegian yogurts is the fact that there is still some fat in them. I think about the only way you can get fat in yogurt in the USA is if you make the yogurt yourself. I actually had a discussion with an Italian woman-in Italian-on a bus in Los Angeles about this very fact-that the fat is taken out of everything here which because there is no flavor oddly makes you want to eat more.

I returned to the USA after my seven year sabbatical in Norway on a mission to find a suitable replacement for my morning yogurt. It took a while-I tried various types mostly with the fruit on the bottom which are all too sweet-because there are none with nuts-including a version made with almond milk. This yogurt tasted like nothing to me. Most I only tried once.

But then one day I discovered Chobani flip Almond Coco Loco. Coconut flavored yogurt with crunchy honey roasted almonds and tiny bits of dark chocolate. It is a reminder of about every dessert you can order in French Polynesia except of course for the absence of the pate feuilletee.

The package even looks like my Norwegian yogurt-Go’ Morgen with the flip top separating the crunchy stuff from the yogurt.

I fool myself into thinking Coco Loco is something healthy, because the reality is that it is probably not much different than eating a Snickers (or rather a Mounds with Almonds) bar. There is the yogurt part which has some nutritional value-vitamin D and protein-and it is dark chocolate not milk chocolate but there is also the added sugar part. And this is the odd bit about low fat yogurts in the USA-the fat is removed but sugar is more likely to take its place.

The flip comes in other flavors none of which conjure up a healthy snack-Chocolate Haze Craze or Key Lime Crumble-these also happen to be too sweet for me.

I have tried to be discreet about my obsession but this is impossible when you show up at the cashier with 10 yogurts every time you shop. “Where are your yogurts?” they ask me on the rare days that I have none in my basket.

I crossed another threshold when I started buying the whole box of 12. One day when the store had none on the shelf, they brought out the box and asked how many I wanted. I asked if I could take the whole box…No problem and I checked out.

I am not regularly checking out with the whole box, but I am no longer embarrassed to do it.

I am curious about the person who created this flavor. Was it a woman or a man? What are they like and where have they traveled? Or was it more scientific-someone smartly was keeping track of which mix-ins people use at the create your own frozen yogurt shop?

Cuckcoo for coco loco-when I looked up how to spell “cuckcoo” I found “coo coo for cocoa puffs” which is defined as a medical term used to describe a person who has irrational, illogical, and/or crazy thought processes. I guess you never know how a seven-year sabbatical in Norway could affect you…