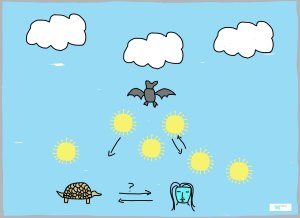 Every mystery has a cast of characters that sidetracks you from the culprit. A good one keeps you guessing until the end. Then it surprises you.

Is Covid-19 one of those stories? I didn’t think it was, and I may be overthinking the dump truck load of information out there on various scientific sites making me consider alternative models for the pandemic. But the reason there’s so much information is that we don’t yet know where the virus came from.

I had no reason to question the conventional model – that the virus originated in bats and transmitted to humans either directly or through a wild (exotic is the media word) intermediate animal. It’s been proven in the previous cases of emerging diseases from coronaviruses.

SARS-CoV was contracted through the palm civet (a small raccoon-like animal that hangs out in trees and is used to make kopi luwak, that expensive coffee produced from beans harvested from its excrement in Indonesia) and MERS, the camel. In both cases, viruses were obtained from animals associated with infected persons. In the case of MERS, the virus was isolated from an owner and his camel.

SARS-CoV-2 most likely did originate in bats. The chain of nucleotides, the order of the As, Cs, Gs, and “T”s, that make up its RNA genome is 96% similar to a coronavirus (named RaTG13) swabbed from a bat in the wild. SARS-CoV-2 arrived in humans through some series of events from bats, but it is not that virus.

But in mid-April, a disturbing question popped into my head that made me doubt the model. Why is SARS-CoV-2 so contagious among humans? “Of course it is. That’s why there’s a pandemic” you might think, until you realize that if Covid-19 is an emerging disease from a rare animal (not a herd of livestock), it’s not behaving like the others. SARS-CoV from 2002 – 2003 infected 8,098 people worldwide killing 774; MERS from 2012 infected 2464 killing 858. Neither disease, even in this modern global era, went “viral”.

The earliest reported case of Covid-19 is from 1 December 2019 in Wuhan, China. By early April, the USA alone was up to tens of thousands of new cases, per day, and the number of infected people worldwide had passed 1 million (2 April 2020).

In my mind, the standard model, a recent leap from a rare wild animal, eaten by (or in contact with) even rarer humans, no longer seemed to fit the wildly infectious nature of SARS-CoV-2 among humans.

What about the seafood market?

The Huanan seafood market in Wuhan is said to be where the jump from animal to human took place. Authorities did collect samples from the market, hundreds of them, in January 2020. But unlike SARS-CoV in 2002, samples were not taken from animals in the market before it was closed and sanitized.

So investigators are left with what they have, 515 samples taken in areas around the market and another 70 taken from vendors. Which of the 70 samples are from vendors and which are from animals or the environment though is unclear.

The RNA genome in these samples is > 99.9% similar to the virus first isolated in patients in Wuhan. Authorities found the virus in the market, but it’s the virus humans have, not an immediate ancestor from animals. So the virus was brought to the market rather than from it.

The clinical history of the original cases from December 2019 supports this chain of events. Thirteen of the first 41 patients reported no link to the wet market, and even only one of four in the first two weeks of December had been to the market. Transmission early in December was already taking place outside of the market.

This negative result doesn’t mean the jump to humans didn’t take place at the market. Authorities just might not have collected the samples at the right time, namely before they cleaned the market. Investigators must now hunt, maybe in the wild, for animals carrying the virus.

So much for sophisticated science.

Has SARS-CoV-2 been detected in wild animals?

As early as April 2020, a coronavirus was collected in lung effluent taken from several Malayan pangolins brought to an endangered animal reserve. Some of the animals showed clinical and histological symptoms of coronavirus-like disease, signs of respiratory distress and even circulating antibodies, unlike a group of Chinese pangolins at the same reserve.

The animals were all suffering from a coronavirus, but not SARS-CoV-2 or any other known coronavirus. But this coronavirus does share an important feature of SARS-CoV-2. Five out of six critical amino acids in its Spike protein, which locks onto cells, are the same in SARS-CoV-2. A computer based algorithm predicted that the pangolin Spike protein would bind to the same receptor protein on human cells, angiotensin-converting enzyme-2 known as ACE2.

Since the pangolin coronavirus might also bind to human cells through the ACE2 receptor, it also has the potential of infecting humans, which further stresses why it’s a bad idea to market or eat these animals.

Now you know what you have in common with the Malayan pangolin, but not the origin of the SARS-CoV-2.

Is it genetically engineered?

Scientists poured over the sequence of the SARS-CoV-2 genome looking for genetic clues to prove or disprove the nefarious activity of genetic engineering. The virus is not genetically engineered. Parts of different viruses were not stitched together to create a Franken-virus. Differences in SARS-CoV-2 are spread all across the genome, and it even has a unique sequence of 12 nucleotides, like a small insert, in the Spike gene relative to RaTG13 and SARS-CoV.

Those sequences correspond to several amino acids where a type of protein scissors in many different cell types cuts the Spike protein. The virus doesn’t infect human lung cells without this sequence, and it may be responsible for the widespread infection of multiple organ systems within any single person.

The simplest explanation, although not the only one, is that the nucleotides are a holdover from an ancient virus and more recent viruses may have lost it.

What do mutations have to do with it?

It’s still possible SARS-CoV-2 came from a lab, but only through natural evolution in cells in a petri dish and accidental release. This scenario is unlikely, but since there’s no evidence that this is not the case, the possibility still has to be considered. One reason is that the virus is mutating, not like an emerging disease, but like it’s seen human cells before.

Mutations happen because of UV, cosmic rays, or just natural errors during the copying of genetic material. Cancer emerges or new mutations in an egg or sperm get passed onto offspring because of these processes. A mutation might be inherited by more animals in a population when it provides an advantage, like green feathers on a white bird or a blue beak rather than a yellow one.

What starts out as a random process can be passed on to offspring because it enhances survival, like finding a mate or escaping predators. A mutation might also be a dead end if it provides no benefit or weakens the animal.

In a virus, a random mutation that might help it to continue its “life” cycle is one that allows it to infect another species.

New species are shaky ground for viruses, so that these mutations, like typos in the genetic code of the virus, occur by accident more frequently. When a coronavirus lands in the lung of another species is when chaos hits the genome copying mechanism. Why this happens is unknown, but the outcome is clear. The disruption refashions the virus for infection of a different species.

The manic mutation moment seems to have been skipped in SARS-CoV-2, at least relative to SARS-CoV as measured in a couple of ways. It might mean that the two viruses were caught at different points in their evolution in humans-one earlier and one later, but it’s not really a slam dunk telling us it came from anywhere else but a wild animal. It might just be the difference between two viruses.

While SARS-CoV infections might have lagged due to a period of adjustment in human cells, SARS-CoV-2 might have been poised to infect us already at the initial jump from a wild animal to an unsuspecting human.

How does this knowledge about the virus help us?

Stability at least in the right genes in the virus genome is good news for the development of treatment, vaccines and diagnostics. If the virus isn’t mutating rapidly, these methods might work over the long term. But it adds to the mystery of the origin of the virus. While we can wonder if the pandemic is due to a lab experiment gone bad, a more plausible explanation is that the virus was already infecting humans long before a cluster of symptomatic patients appeared in Wuhan.

Now we have to be concerned that if SARS-CoV-2 came from an animal in the wild, and there are more of those animals out there, will they remain a source of infection causing future pandemics?

With over 11 million SARS-CoV-2 infected humans worldwide, and possibly more running around undetected, I wonder if it might be the other way around. Animals are in danger because of us.

Meanwhile, I’m still waiting for it, for the endangered animal I’ve never heard of that one person in another part of the world had some unlucky encounter with, in the wild or in an urban setting.

Stay safe and use a mask!