Did you know sea stars have eyes? I didn’t, not until I started writing my fictional romance novel. Yep, they have a visual organ called an eyespot. And get this, they have one at the end of each of their arms! These eyespots detect light and dark, and large structures like the reef, but not color. Some sea stars in the deep sea might “see” bioluminescence and even use bioluminescence signaling themselves.

The question came up while I was writing a scene describing how a type of sea star, a basket sea star, responds to light. A basket sea star still has only five arms, but lace-like extensions grow out from each one by possibly as much as a meter or more. Like a gigantic white net, it drops open in the night to feed in the water column rather than by scavenging across the sea floor.

But if you shine a light on one, it retracts, even in the dark. My first thought was the animal responds to the heat of the light. I decided this idea was ridiculous.

So I asked the crazy question, “Do sea stars have eyes?” Someone else did ask that question, which led me to a body of research literature describing the characteristics of the eyespots of sea stars. Their eyes are composed of smaller units called ommatidia, like the compound eyes of an insect. I’ll have to look the next time I see one.

“What color are pygmy seahorses when they are born?” I needed to know. First, I discovered that it was someone’s PhD to find out. That alone was a revelation to me as a scientist who plunged into the competitive (and sometimes depressing) world of cancer research as a graduate student.

So their ability to adopt the color of the sea fan they settle in might be in their genes, but their color is not.

What I wouldn’t give to know how that works at the molecular level. Does the seahorse receive a signal from the coral to turn the same color? Or does it come from something they eat?

Many people might consider the study of an animal occupying 2 cm of space a waste of government funding. But the existence of pygmy seahorses alone is fascinating enough, and emphasizes the importance of caring what we dump into our environment. Maybe the disappearance of pygmy seahorses is as good of an indicator of the health of our oceans as anything else. 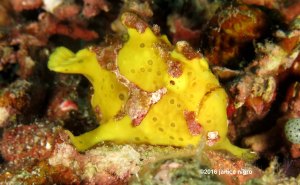 Another scene in the book has a frogfish in it. For this scene, I needed to know how they breed. I’ve seen eggs laid down on a substrate (anemonefish), sprayed into the water column (mandarin fish), and carried in the mouth (cardinal fish).

I had once seen an image of a frogfish protecting its eggs with its hind fin (check out the image in the link!). I discovered that that behavior is called brooding. Brooding means that the eggs of the fish are attached to one of the parents while they incubate. Some frogfish are egg brooders while others are not.

But so are seahorses and their cousins the pipefish.

I learned that anemonefish live a life made for soap operas. They are all born male. One mating pair rules in any anemone. If the female dies, her male partner turns into the female, and the next largest male in the anemone becomes her new partner.

It’s the biology overlooked in the film Finding Nemo. In the real world of undersea life, Nemo’s father Marlin would have become the ruling female (now his mother) and found a new mate.

Then I discovered a whole book (Sex in the Sea by Marah J. Hardt) on the sexual and gender bending behavior of sea life.

There’s also a lab bench in my book. I’m a molecular biologist, so I’m still looking for ways to talk about PCR and DNA sequencing in literary terms. Or I might just bury the book in a drawer and start over with a new one.

Pygmy seahorses were discovered only because one fell out of a sea fan sample in a lab. A visual experiment.

But I discovered that the sensitivity of DNA sequencing has inspired a unique approach to tracking animals and maybe finding unknown ones living in any single habitat underwater. Scientists are now taking sediment or sand samples from the sea floor and isolating DNA from them to perform DNA sequencing. Like a forensic scientist taking DNA from a crime scene, scientists are trying to find out who’s been there based on DNA shed into the underwater environment. It’s a liquid biopsy of the sea like the liquid biopsy (DNA from a blood sample) used to follow cancer patients.

It’s embarrassing to think that while I’ve thought about many things that could be swirling around my head underwater, I never thought of DNA. What a clever solution to tracking the animals that pass through or live in a specific spot under the sea without having to see them.

But my novel is also fiction. Some stuff you just have to make up. Why you choose to be so particular about some facts while you make up the others, I can’t say. Maybe it’s the ones that don’t interest you so much. Or you make things up because you can.

I didn’t look up much about boat building, although a major prop in the book is a research boat that doesn’t yet exist. One that magically runs on plastic (although I believe this is something that actually works) and hydroelectric power. I didn’t even bother to check the timeline for the construction of such a vehicle.

The most important part of the research for your book is what you’ve probably been doing your whole life. I’ve woven some events in my life into a long winded tale. Like another author wrote, it’s what she knows. That doesn’t mean the details are true, or that you want them to be true, but you use the settings and circumstances (like love, work, and travel) you’ve been in. I’ve been in the lab, in Norway, and underwater. Something about them wants to come out in a meaningful story.

That doesn’t mean I don’t have something more galactic to write about in my future. Or more outside of my experience in life, but I’m betting if I do try to write another story it will be still here on Earth. Just perhaps many miles underwater.

So yes, you might need to do some research for your book, but don’t overlook the notes you’ve been taking throughout life already.

If you were to write a novel, what would it most likely be about?

Stay safe and use a mask! I don’t mean the kind underwater…:).

2 thoughts on “You need to do research for a fiction novel?”