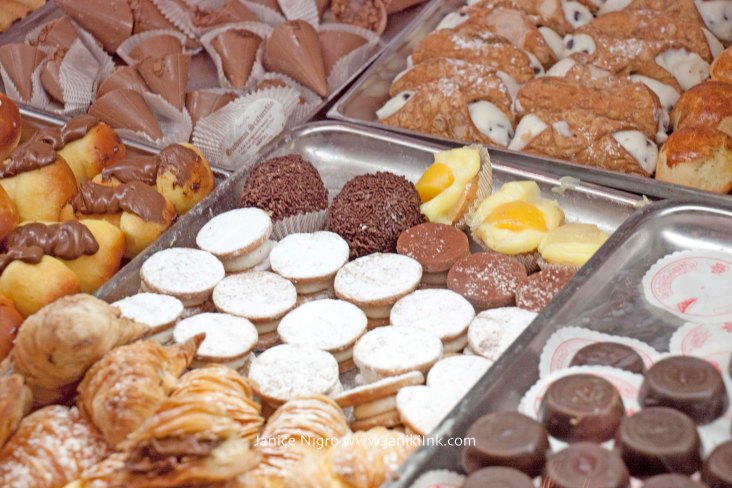 You can often recall the precise moment you fall in love. Sometimes the match looks good on paper and the connection is immediate. And sometimes it comes out of nowhere and hits you like a ton of bricks. There are no birds singing or harps playing, but your basic chemistry changes from a blip for just another person on the planet to a full-on hormonal rush for I gotta have him.

That’s what happened to me with Napoli.

Napoli is “caotica.” Any aspect of the city from the outside betrays this underlying kind of madness. It’s gritty, crowded, and in places crumbling. Graffiti on nearly every wall belies a basic struggle to be heard (or an exceptional aptitude for creativity), and the diversity in the physical appearance of the people is evidence of a dazzling mix of DNAs originating worldwide from invaders across centuries.

It has all the bad aspects of a big city mixed in with a bit of old world style elegance. It’s hard to walk past the garbage without feeling a little disgusted with urban life. I fought the urge to scream “pick it up!” in this city with an awe inducing view of a sea a color of blue invented here.

No, Napoli is not beautiful everywhere on the outside. But I fell in love with the city.

The closet-sized pastry, pizza, and fried food kitchens lining the narrow streets set up like a medieval maze in the city add to your discomfort in the city. There are so many. Aromas, good and bad ones, with pheromone-like potency fill the air, intensifying the confusion.

As if Napoli is flirting with you and you are shy, you want to go in, but you’re not sure. Will I like it, will I get sick, will it be worth the extra calories today, will they understand me?

“Just go in. Just go into any one of them,” my taxi driver Enzo told me.

We remained in a state of walking limbo until we passed a pasticceria (pastry shop) on Via Benedetto Croce with locals packed in there like sardines. I looked at my mom and said, “I think this is the place.”

With nothing more than a limited Italian vocabulary and a vague notion of what might happen in there, we headed in. I wanted to say no. Crowds of people in general make me nervous, especially in a foreign city and one where the military stands by with machine guns.

It was impossible to see where the line began or ended or what you were to do. The shop was dimly lit. Parts of the menu were handwritten.

It wasn’t my first time inside a pasticceria. I guessed as in every other take away place in Italy, I would have to pay first, and then show my receipt to claim my dessert. I asked a man near us in Italian, and he told me that we were in the right spot and that indeed we had to pay first. At least as I understood it.

I realized that our adventure had some potential for failure; neither of us had eaten these pastries before. In that crowd, it was difficult to get close enough to the display case to see, to decide, and to not lose my place in line. And even if I knew what to order, I doubted my choice would still be available by the time my number came up. I was out-matched by all the others there on that Sunday, who had probably been sampling the pastries since they were in utero.

My friend in line laughed, but he helped me prepare for my turn in front of the cashier. My tongue tripped over the word for the pastry I wanted, sfogliatella, which my friend in line so effortlessly pronounced for me.

When a woman asked if we spoke English, I thought for a moment my experiment in Italian might be over. The funny thing was, she didn’t speak English. She started to call for a friend who did, but time was running out. We were moving forward towards the cashier. She joined in the conversation in Italian anyway, telling us that the pasticceria, Scaturchio, was so busy because it’s a famous place.

We reached the cashier and paid. The crowd, several people deep, separated us from the pastries, and we still had to hear our number “dodici (12)” called out in Italian. We survived that final test and emerged into the sunlight with our two “dolci,” calorie-rich prizes.

But I fell in love with Napoli in that pasticceria, even before my teeth crunched through the delicate pastry to the gooey sweet center, and the chocolate dripped onto my tongue.

I continued my affair with Napoli outside of the pastry shop. Her people would speak to me in their language, despite my poor vocabulary and my inability to distinguish the past and the remote past. Or maybe because of it.

Napoletani were helpful with where to get on the bus and where to get off. Taxi drivers gave me recommendations on their favorite places to eat pizza and gelato and how my love life would change if I stayed in Napoli. Another man on a Vespa asked me what I was doing taking photographs of the old doors in his neighborhood. An attendant at the train station embarked on a short almost musical litany, “Cara” he called me, after I missed the train he had just sent me directly to. They all smiled when I spoke in Italian.

“We feel for immigrants today because here we are all just immigrants. We are familiar with what it means to struggle,” Pasquale, a Southern Italian once told me.

A wall graffitied with the words “tourist go home” sent the wrong message. It cost me some patience, some nerve, and all of 2 euros to find that out. Travelers often pass through Napoli to have a glimpse of rare antiquities of the distant past, but it is through the present that Napoli stole my heart.

I fell in love with Napoli that day in the pasticceria. I could be grateful for that crowd for my lessons in Italian on Italians and for one more reason: it kept me from going back in for more.